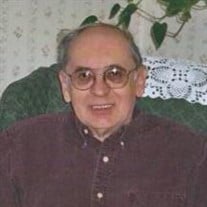 William M. Tower, Sr., 85, of Adams, died Thursday, January 21, 2021 at Williamstown Commons. He was born at home in North Adams on December 12, 1935, son of the late William H. and Laura L. (Perra) Tower. He graduated from Drury High School in 1953, and attended night school at the former North Adams State College for two years. Bill worked as a senior technician at the former Sprague Electric Co. in North Adams and Hudson, N.H. for 35 years. He then worked at Stop & Shop in North Adams, and last worked at MRA Laboratories in Adams until retiring in 2000.He was a talented carpenter, and enjoyed gardening and his two dogs. He was an avid fan of the Red Sox, Celtics and Patriots. He is survived by his wife, Sydney (St. John) Tower; three daughters, Karen Dowd of Greenfield; Barbara Starr of Leominster; and Patricia Bishop of Hancock; three stepsons, Robert, Anthony and Matthew Tomkiewicz; 9 grandchildren, 10 step grandchildren, 2 great grandchildren, 5 step great grandchildren, and his former wife, Annette (St. Cyr) Knickerbocker of Maine. He was predeceased by a son, William M. Tower, Jr. in 2000. The family is grateful for the wonderful, compassionate care given to Bill, and his wife, by everyone at Williamstown Commons, and the excellent Hospice nurses Julie and Annie and Hospice Chaplain, Joan. At Bill’s request, burial will be private at a later date. Memorial donations may be made to the Berkshire Humane Society, 214 Barker Rd. Pittsfield, MA 01201. The PACIOREK FUNERAL HOME, Adams, is in charge of arrangements. To leave a message of condolence, please go online to www.paciorekfuneral.com

The family of Mr. William M. Tower Sr. created this Life Tributes page to make it easy to share your memories.

Send flowers to the Tower family.