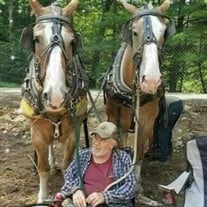 Mr. William “Inky” Malloy, Sr., 70, of Cheshire, died on Wednesday, November 4, 2020 at Berkshire Medical Center in Pittsfield with his wife by his side. He was born in Adams on August 22, 1950, a son of the late Louis and Mary (Gardner) Malloy. He attended schools in Adams, including the former Notre Dame Elementary School. Inky was a self-employed logger, and farmer, having owned and operated William Malloy & Sons for many years until retiring. He was a member of the Eastern Draft Horse Association and loved passing his knowledge down to his children and grandchildren. Inky loved fishing and hunting as well as watching the horses work while having an occasional beer. His biggest passion in life was his family he absolutely adored his wife, loved his children and would do anything for them but his grandchildren kept him young and he loved them dearly. He is survived by his mother in law Mary A Robert who he cherished of Adams ,his wife, the former Lisa A. Robert, whom he married on January 13,1979; two sons, William R. Malloy, Jr. of Cheshire and Gary A. Malloy, Sr. and his wife Tammy of Adams; three daughters, Heather Malloy of Indianapolis, IN, Katrina Malloy of Adams and Megan Watts and her husband Kenny of Adams; five brothers, Louis Malloy, Jr., Joseph Malloy, Sr., Bernard Malloy, Ronald Malloy and Gene Malloy; one sister, Rose Schaffrick; 9 grandchildren; Cassie and Taylor Scott of Indiana, William, Mackenna and Bethanie Malloy of Cheshire Gary and Deseray Malloy and Angela and Kenneth Watts of Adams .Many nieces and nephews and extended family and friends. He was predeceased by three brothers, Robert, James and John Malloy and by two sisters, Theresa Whitmore and Mary Jane Ferris. Funeral services and burial will be private for the family. Calling hours will be on Wednesday, November 11th from 4:00 P.M. to 7:00 P.M. at the PACIOREK FUNERAL HOME, 13 Hoosac St., Adams. Due to current restrictions, admittance to thee funeral home may take longer, and all attending are required to wear a face covering and practice social distancing.

The family of Mr. William "Inky" Malloy, Sr. created this Life Tributes page to make it easy to share your memories.

Send flowers to the Malloy, family.