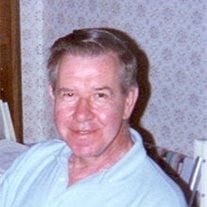 Mr. William Richard Kuczynski, 76, of 18 Water St., Adams, died Saturday evening at Berkshire Medical Center, Pittsfield. He was born in Fall River, MA, on September 6, 1929, son of the late Boleslaus and Bertha (Nowak) Kuczynski. He came to Adams as a child and attended local schools, graduating from the former Adams High School with the class of 1948. Mr. Kuczynski worked for many years as an assemblyman at General Electric Co., Pittsfield. He was a communicant of St. Stanislaus Kostka Church, Adams. He was a member of the Burnette Bednarz Post 1995 Veterans of Foreign Wars, Adams, Adams Post 160 American Legion, Adams, and the Polish National Alliance, Adams. He was an avid stamp and coin collector, and enjoyed working with computers. His first wife, the former Regina Straczek, whom he married in 1956, died in 1963 during child birth. He is survived by; 1 Daughter - Lori E. Kuczynski of Adams; 1 Brother - Walter Kuczynski of San Francisco, CA; 1 Sister - Evelyn Harrison of Adams 1 Grandson - Matthew Milligan of Adams, and several nieces and nephews, and his former wife, Nancy Lanski of Adams. He was predeceased by a brother Edwin Kuczynski. The funeral will be held on Wednesday March 8, at 9:00 AM from the AUGE-PACIOREK-SIMMONS Funeral Home, 13 Hoosac St., Adams, followed by a Liturgy of Christian Burial at 10:00AM in St. Stanislaus Kostka Church, Adams, with Rev. David Raymond, Pastor of St. Mary of the Assumption Parish, Cheshire, officiating. Burial will follow in St. Stanislaus Kostka Cemetery, Adams. Calling hours will be Tuesday from 4:00 to 7:00 PM at the funeral home. Memorial donations may be made to Elder Services of Berkshire County, or the Arthritis Foundation, through the funeral home.

The family of William R. Kuczynski created this Life Tributes page to make it easy to share your memories.

Send flowers to the Kuczynski family.