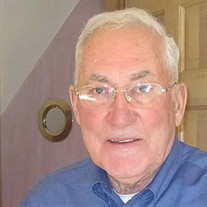 Mr. William T. Kittler, 82, of Adams, died on Friday, January 15, 2021 at Berkshire Medical Center in Pittsfield. He was born in Adams on December 13, 1938, the son of the late William and Anne (Browne) Kittler. He attended local schools and graduated from the former Adams Memorial High School, where he was a three-sport athlete and an All-American football player. He earned his Bachelor’s Degree in Economics with High Honors from Michigan State University. Mr. Kittler was proud to work his entire career for the General Electric Company in Pittsfield until retiring in 2001 as a high level financial manager. To begin his career, he was accepted into and completed the elite Financial Management Leadership Program, GE’s equivalent to earning a financial graduate degree. He was an honored member of the GE Elfun Society. He was a communicant of the Parish of St. John Paul II, Adams, where he had been a volunteer and served on its finance committee. He was a longtime and proud member of the South Adams Savings Bank’s Board of Trustees, having served from 1990 until 2011, and a member of the finance committee and the Board of Investment. He was a charter member of the Adams Youth Center Board of Directors, long-time trustee and chair for the W.B. Plunkett Memorial Hospital Trust Fund, a member and chairman of the Adams-Cheshire Regional School Committee, an elected member of the Adams Parks and Grounds Commission, and was a coach for the Adams Little League. He was long known and recognized for his commitment to the community, fairness on the issues, and integrity beyond reproach. He is survived by the love of his life, the former Barbara A. Ciolkowski, whom he married on September 7, 1963; two sons, William Kittler and his wife Maureen of Pittsfield, and Robert Kittler and his wife Karla of New Hampshire; his daughter Lisa Schifilliti and her husband Roy of Needham, MA; and known as Papa to seven grandchildren, Megan, Molly, Abigail, Alexander and Katherine Kittler and Grace and Willa Schifilliti; and by special nieces, nephews, great nieces, great nephews, and friends he treated just as if they were his family. He is also survived by his beloved sisters- and brothers-in-law, and best friends Janice and Joseph Baran, and Paul and Judy Robarge. He was predeceased by his sister Patricia Goss and her husband and the older brother he never had, Ronald. “IT’S ALL ABOUT FAMILY!” He was an avid golfer at the Stamford Valley Golf Course, a master photographer, and ever present at all his children and grandchildren’s meets, games and extracurricular activities. A graveside service will be held on Wednesday, January 20th at 12:00 Noon in St. Stanislaus Kostka Cemetery, Adams. Due to current restrictions, all attending must wear a face covering and practice social distancing. The family looks forward to seeing you for a big Bill Kittler bear hug at a celebration of life after COVID, time and date TBD. There are no calling hours. Memorial donations may be made to St. Stanislaus Kostka School, 108 Summer St., Adams, MA 01220 or to the St. John Paul II Charity Center, P.O. Box 213, Adams, MA 01220.

Mr. William T. Kittler, 82, of Adams, died on Friday, January 15, 2021 at Berkshire Medical Center in Pittsfield. He was born in Adams on December 13, 1938, the son of the late William and Anne (Browne) Kittler. He attended local schools and... View Obituary & Service Information

The family of Mr. William T. Kittler created this Life Tributes page to make it easy to share your memories.

Send flowers to the Kittler family.