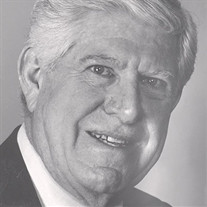 Mr. William C. Denault, 95, of Adams, died on Wednesday, September 5, 2018. He was born in Adams on August 20, 1923, a son of the late Eugene and Mary (Ryan) Denault. He attended schools in Adams and graduated from the former Adams High School. He then went on to earn his Bachelor’s degree in Economics from the College of William and Mary in 1949. Mr. Denault worked in many capacities in the Naval Ordnance Division of General Electric Co., Pittsfield until retiring as a manager in 1986. William was passionate about serving his community in different ways. He was a long time member of the Adams School Committee and one of the members overseeing the construction of Hoosac Valley High School. He served on the Board of Directors for the GE Credit Union and Hillcrest Hospital. He was a communicant of the Parish of St. John Paul II at Notre Dame des Sept Douleurs Church, Adams, and had been a longtime active communicant of the former St. Thomas Aquinas Church, Adams. He assisted in the restoration of the stained glass windows in the Church and the Parish Rectory. He enjoyed traveling with his family and friends, golfing, skiing, football, the Red Sox and restoring furniture. He is survived by his wife, the former Dorothy M. Griffel, whom he married on November 24, 1951; one daughter, Susan Denault and her partner Michael Donlon of New Ashford; a sister-in-law, Isabelle Denault and her son Robert of Reading, MA, and many nieces and nephews including Donna Sawyer and her husband Fred of Savoy, Robert Clark and his wife Penny of North Adams and Mary Ellen Carlow Hastings of Colorado. He was predeceased by two brothers; Donald R. and James E. and by a sister Irene B. Clark. A Liturgy of Christian Burial will be celebrated on Thursday, September 13 at 11:00 A.M. in Notre Dame des Sept Douleurs Church, McKinley Square, Adams. Burial will follow in Bellevue Cemetery, Adams. There are no calling hours. Memorial donations may be made to Hospice Care in the Berkshires, 877 South St., Pittsfield, MA 01201 or to Cure Alzheimer’s Fund, 34 Washington St., Suite 200, Wellesley Hills, MA 02481.

Mr. William C. Denault, 95, of Adams, died on Wednesday, September 5, 2018. He was born in Adams on August 20, 1923, a son of the late Eugene and Mary (Ryan) Denault. He attended schools in Adams and graduated from the former Adams High School.... View Obituary & Service Information

The family of Mr. William C. Denault created this Life Tributes page to make it easy to share your memories.

Send flowers to the Denault family.