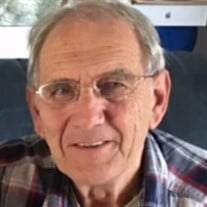 William J. Bresett Sr., 76, of Adams, crossed over to his eternal life to be with his son, Mike, on Wednesday, September 4, 2019, surrounded by his loving family. He was born in Adams on March 20, 1943, a son of the late John and Freda (Gonyea) Bresett. Bill was a loving husband, father, grandfather, great grandfather, brother, uncle, and true friend. Bill’s honesty and integrity were exceptional, and he was well-respected by all. Bill worked for many years in General Electric and General Dynamics in Pittsfield, until retiring in 1998. Following his retirement, he worked for his son Michael’s business, B&B Precision Builders. Bill’s attention to detail and craftsmanship made him a mentor to many friends and professionals. Bill is survived by his wife, the former Betty J. Shaw, whom he married on September 21, 1963; a son, William Bresett, Jr. and his wife Lisa; a daughter, Bonnie Bresett; a daughter-in-law, Renee Bresett; and a sister, Shirley Delmolino. Bill was a loving Dziadziu to his ten grandchildren: Vanessa, Amanda, Meriah, Michael, Mitchell, Brianna, Olivia, Claudia, Alyssa and Kiara, and his three great-grandchildren, Colton, Arya, and Rayah. He supported all of his grandchildren in everything that they did. He was predeceased by his son, Michael Bresett, who crossed over on April 4, 2009, and by his brother, John Bresett, on July 26, 2019. Bill was a man of few words, but when he spoke he nailed it! Bill was an avid fisherman and hunter who loved to play cards and spend time with friends and family at “The Camp” in Vermont. One of Bill’s greatest joys was walking the shoreline of Kennebunkport, Maine, picking up rocks and sea glass or playing a competitive game of stinkpipe with the “Shawville” family. In his late retirement years, you could find Bill and “Shaw” with a pair of binoculars, looking at birds and butterflies or watching their grandchildren’s sporting events. We are very thankful for Dr. Rudin, Dr. Callahan, Dr. Elpern, Dr. Winer, and the doctors at Berkshire Medical Center. We are especially grateful for the angels from the Cancer Center in Pittsfield, and the compassionate team of nurses and doctors on the 5th floor and in the ICU at Berkshire Medical Center. A Liturgy of Christian Burial will be celebrated on Wednesday, September 11th at 10:00 A.M. in St. Stanislaus Kostka Church, Adams, celebrated by Rev. Steven Montesanti, Pastor. Burial will be private at a later date. There are no calling hours. Memorial donations may be made to the Friends of Michael J Bresett Memorial Scholarship Fund at 24 Fisk Street Adams, MA 01220 or Dana-Farber Cancer Institute and The Jimmy Fund P.O. Box 970025 Boston, MA 02297-0025

William J. Bresett Sr., 76, of Adams, crossed over to his eternal life to be with his son, Mike, on Wednesday, September 4, 2019, surrounded by his loving family. He was born in Adams on March 20, 1943, a son of the late John and Freda (Gonyea)... View Obituary & Service Information

The family of Mr. William J. Bresett Sr. created this Life Tributes page to make it easy to share your memories.

Send flowers to the Bresett family.