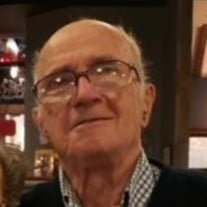 Mr. Wilfred R. Bourdon, Jr., 93, of Adams, died on Wednesday, March 9, 2022, at his home surrounded by his family. He was born in Adams on June 6, 1928, a son of the late Wilfred and Flora (Pinsonneault) Bourdon. He attended schools in Adams. Mr. Bourdon worked for the James River Paper Company and later its successor, the former Crown Vantage in Adams for 54 years until his retirement. Earlier he had worked for the former Grande’s Florist in Adams. He was a communicant of the Parish of St. John Paul II, Adams. He was a member of the Adams Lodge of Masons where he had served as the Worshipful Master, he was the former president of the Paper Makers Union, a member of the Cartier Club, the Adams Turners and the retired men’s club. In his earlier years he had played semiprofessional football. He enjoyed bowling, gardening, casino trips and was an exceptional card player. He is survived by his wife of 64 years, the former Beatrice Corbiere, whom he married on February 8, 1958; two sons, Wilfred R. Bourdon, III and his wife Beth of Adams and James Bourdon and his wife Cassandra of Westford; three daughters, Elizabeth Mullen and her husband James of Walpole, Jeanne Fitzgerald and her husband Stephen of Adams and Judith Horton and her husband Wayne of Adams; fifteen grandchildren, Andre Fitzgerald, Laura Dorr, Andrew Bourdon, Marlena and John Horton, Matthew, Hannah and Daniel Mullen, Brittany Burke, Nicholas and Lucas Bourdon, Abigayle and Isabelle Lunsford and Emily and Jonah Bourdon; five great grandchildren, Remington, Avionna, Anthony, Abigail and Thomas; two brothers, Rene and Robert Bourdon, both of Adams and by many nieces and nephews. He was predeceased by his son David Bourdon, five brothers, Edward, Leo, Louis, Francis and Richard Bourdon and by two sisters Florence Albareda and Jeannette Adamczyk. A Liturgy of Christian Burial will be celebrated on Monday, March 14th at 11:00 A.M. in Notre Dame des Sept Douleurs Church, Adams. Burial will be at a later date in Bellevue Cemetery. Calling hours at the PACIOREK FUNERAL HOME, 13 Hoosac St., Adams, are Sunday from 2:00 P.M. to 4:00 P.M. The family requests anyone attending wear a face covering. Memorial donations may be made to the Adams Ambulance Service, 185 Columbia St., Adams or to the Alert Hose Company, 3 Columbia St., Adams, MA 01220.

Mr. Wilfred R. Bourdon, Jr., 93, of Adams, died on Wednesday, March 9, 2022, at his home surrounded by his family. He was born in Adams on June 6, 1928, a son of the late Wilfred and Flora (Pinsonneault) Bourdon. He attended schools in Adams.... View Obituary & Service Information

The family of Mr. Wilfred R. Bourdon Jr. created this Life Tributes page to make it easy to share your memories.

Send flowers to the Bourdon family.