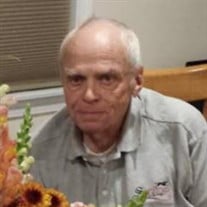 Mr. Wesley H. Briggs Jr., 87, long time resident of Savoy, passed away peacefully on Sunday, December 26, 2021. He was born in Pittsfield on January 24, 1934, a son of the late Wesley and Dorothy (Knight) Briggs. He attended local schools and worked on his family farm until he entered the United States Army, where he served during the Vietnam War, until receiving his Honorable Discharge as Private First Class on November 6, 1958. Wes was employed by the Massachusetts Department of Conservation & Recreation for more than 37 years, until his retirement in January 2001. Post retirement, he served as a member of the Savoy Conservation Committee. Those who knew Wes understood he was a man of few words. A nod of his head, the occasional smile or a wave to say hello. He was a hard worker and could be feisty in his younger years, but as time passed, he too mellowed with age. Wes was good hearted, instilled strong core values within his family and would be the first to stop and help someone in need. He enjoyed watching the Red Sox, making maple syrup and attending horse draws at the local fairs. Wes appreciated life in country and living in Savoy, where he and his wife established their home in 1964. He will be greatly missed by family and friends. His wife, the former Sylvia Swift, whom he married on October 1, 1961, died on June 21, 2021. Wes is survived by his daughter, Karyn Stavaski and her husband Paul of Cheshire; a brother Ronald Briggs of Florida; a sister Sharon Martin of Williamstown and by many nieces and nephews. He was predeceased by two brothers, Bruce and Carl Briggs and by two sisters, Beverly Edmundson and Cheryl Kinney. Funeral services and burial will take place at the Florida Baptist Church cemetery in the spring. Memorial donations may be made to the Derek Clark Educational Fund through the PACIOREK FUNERAL HOME, 13 Hoosac St., Adams, which is in charge of arrangements.

Mr. Wesley H. Briggs Jr., 87, long time resident of Savoy, passed away peacefully on Sunday, December 26, 2021. He was born in Pittsfield on January 24, 1934, a son of the late Wesley and Dorothy (Knight) Briggs. He attended local schools and... View Obituary & Service Information

The family of Mr. Wesley H. Briggs, Jr. created this Life Tributes page to make it easy to share your memories.

Send flowers to the Briggs, family.