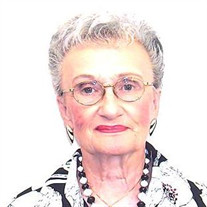 Mrs. Victoria Blanche (Pelczynski) Hoellerich, 91, of Cheshire, died on Wednesday, October 9, 2019 at her home. She was born in Adams on December 12, 1927, a daughter of the late Adam and Blanche (Oparowski) Pelczynski. She attended the St. Stanislaus Kostka School and the Plunkett Junior High School. Mrs. Hoellerich was primarily a homemaker but had worked for the former Sprague Electric Co., North Adams and the Ayrhill Farms delivering milk. She was a communicant of the Parish of St. John Paul II at St. Stanislaus Kostka Church, Adams. She was a member of the Polish Women’s Alliance of America #776 and the St. Stanislaus Kostka Rosary Sodality. She had also been a longtime volunteer at the former North Adams Regional Hospital in the medical library. Her husband, William Hoellerich, whom she married on November 16, 1946, died on September 13, 1993. She is survived by her son, Roger Hoellerich and his wife Kenna of Savoy; her two daughters, Irene Blazejewski and her husband John of Orlando, FL and Cynthia Daunais and her husband Donald of Cheshire; a grandson Brian Blazejewski of Orlando; one sister, Sr. Mary Florence CSSF of Enfield, CT and many nieces, nephews, grandnieces and grandnephews. She was predeceased by four brothers, Stanley, Frank, Charles and Rev. Walter Pelczynski, MIC. She was also predeceased by a sister, Wanda Stone. The funeral will be held on Wednesday, October 16th at 10:30 A.M. from the PACIOREK FUNERAL HOME, 13 Hoosac St., Adams, followed by a Liturgy of Christian Burial at 11:00 A.M. in St. Stanislaus Kostka Church, Adams, celebrated by Rev. Steven Montesanti, Pastor. Burial will follow in St. Stanislaus Cemetery, Adams. Calling hours are Wednesday morning from 9:30 A.M. to 10:30 A.M. at the funeral home. Memorial donations may be made to Hospice Care in the Berkshires, 877 South St., Pittsfield, MA 01201.

Mrs. Victoria Blanche (Pelczynski) Hoellerich, 91, of Cheshire, died on Wednesday, October 9, 2019 at her home. She was born in Adams on December 12, 1927, a daughter of the late Adam and Blanche (Oparowski) Pelczynski. She attended the St.... View Obituary & Service Information

The family of Mrs. Victoria B. Hoellerich created this Life Tributes page to make it easy to share your memories.

Send flowers to the Hoellerich family.