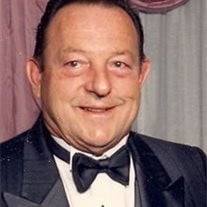 Victor John Bednarz, 73, of 16 Smith St. Adams, died Thursday morning at his home. He was born in Adams on August 16, 1933, son of the late Victor S. Bednarz and Julia (Hoczela) Bednarz Ciuk, and attended Adams schools, graduating from the former Adams High School in 1951. He was a Veteran of the Korean Conflict, serving with the US Air Force from 1952 until 1956. Mr. Bednarz worked as a plumber for Ouellette Plumbing and Heating in Adams for 35 years, until retiring in 1995. He served as an Adams firefighter, and was elected to the Alert Hose Company on January 4, 1966. He served as Foreman of the company from 1972 to 1974, and retired on May 3, 1977 as an Honorary Member. He was a communicant of St. Stanislaus Kostka Church, Adams. He enjoyed football, traveling, deep-sea fishing, dogs, and especially enjoyed being a member of the morning coffee club at the Convenient Store in Adams. He is survived by his wife of 50 years, the former Barbara J. Heywood, whom he married on April 27, 1957; 1 Son - John Bednarz and his wife, Karen, of Adams; 4 Daughters - Julie Russell and her husband, Mark, of Holden, MA; Brenda Skalski and her husband, David, of Adams; Jennifer Quinn and her husband, Michael, of Webster, MA and Vicki Shipley and her husband, Steven, of Fort Drum, New York; 2 Sisters - Theresa Zieminski of Cheshire, and Lorraine Tanguay of New Jersey; His stepfather - Michael Ciuk of Williamstown; 13 Grandchildren, and several nieces, nephews, grandnieces & grandnephews. The funeral will be held on Monday, March 26th, at 9:00 AM from the PACIOREK FUNERAL HOME, 13 Hoosac St. Adams, followed by a Liturgy of Christian Burial at 10:00 AM in St. Stanislaus Kostka Church, Adams, celebrated by Rev. Daniel J. Boyle, Pastor of the Catholic Parishes of Adams. Burial will follow in St. Stanislaus Kostka Cemetery, Adams. Calling hours are Sunday from 4 to 7 PM at the funeral home. Memorial donations may be made to the VNA & Hospice of Northern Berkshire, PO Box 869, North Adams, MA 01247.

Victor John Bednarz, 73, of 16 Smith St. Adams, died Thursday morning at his home. He was born in Adams on August 16, 1933, son of the late Victor S. Bednarz and Julia (Hoczela) Bednarz Ciuk, and attended Adams schools, graduating from the... View Obituary & Service Information

The family of Victor J. Bednarz created this Life Tributes page to make it easy to share your memories.

Send flowers to the Bednarz family.