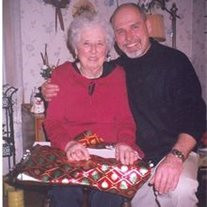 Mrs. Veronica Jane (Fryc) Kus, 86, of 7 Fryc Lane, Adams, died peacefully Saturday morning at her home. She was born in Adams on September 3, 1920, a daughter of the late John and Anna (Flaga) Fryc, and attended Adams schools. Mrs. Kus last worked at General Electric Co. in Pittsfield for 15 years, retiring in 1985. Earlier, she had worked at the former Wall-Streeter Shoe Co. in North Adams. She was a communicant of St. Stanislaus Kostka Church, Adams, where she was a Lector for many years, and, more recently, was also a Lector for the Parish of Notre Dame & St. Thomas Aquinas in Adams. She enjoyed participating in the St. Stanislaus Parish bazaars, helping to prepare the polish foods. She was a highly contributing member of the Adams Agricultural Fair Association since the early 1990's, acting as the chairperson of its floral division. She was a member and officer of the North Adams Garden Club and was chairwoman for their annual flower shows. She enjoyed Gardening, cooking, swimming, traveling, photography, and playing the organ. Her husband, Joseph F. Kus, whom she married on November 10, 1945, died on October 1, 2001. She is survived by 2 sons - Joseph F. Kus, Jr. and his wife, Marcia, of Adams; and James J. Kus and his wife, Sharon, of Pittsfield; 1 Daughter - Kathleen A. Lavigne, and her former husband, Michael, of Enfield, CT; 3 grandchildren - Stephanie and Jennifer Kus, both of Pittsfield, and Andrew Lavigne of Enfield, CT; and several nieces, nephews, grandnieces, grandnephews and cousins. She was predeceased by another grandson, Matthew Lavigne, on December 7, 1995. The funeral will be held on Wednesday, October 11th, at 9:00 AM from the AUGE-PACIOREK-SIMMONS Funeral Home, 13 Hoosac St. Adams, followed by a Liturgy of Christian Burial at 10:00 AM in St. Stanislaus Kostka Church, Adams. Burial will follow in St. Stanislaus Kostka Cemetery, Adams. Calling hours are Tuesday from 4 to 7 PM at the funeral home. Memorial donations may be made to the Adams Agricultural Fair Association or to the Hole in the Wall Gang Camp in Ashford, CT through the funeral home.

The family of Veronica J. Kus created this Life Tributes page to make it easy to share your memories.

Send flowers to the J. family.