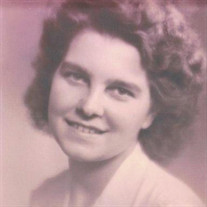 Mrs. Veronica (Witkowski) Kondel Durwin, 94, of Adams, died on Saturday, April 24, 2021 at Mount Carmel Care Center in Lenox. She was born in Lodz, Poland on November 4, 1926, a daughter of the late Jean and Clementine (Jablonski) Witkowski. She attended schools in France before moving to the United States. Mrs. Durwin worked for many years as a seamstress for the former Waverly Fabrics until her retirement. She had also worked for the Berkshire Fine Spinning Co. and the former Wall Streeter Shoe Company as a shoe maker. She was a communicant of the Parish of St. John Paul II at St. Stanislaus Kostka Church, Adams. She loved sewing, cooking and baking for her family and friends; her shoes; spending time at Racine’s Vegetable Stand; America and the American Flag and most of all her family. Her proudest day was when she became an American Citizen. Her first husband, Stanley Kondel, whom she married on August 16, 1947, died on August 29, 1965. Her second husband, Arthur Durwin, whom she married on July 17, 1974, died on September 27, 2003. She is survived by her son, Paul Kondel and his wife Pamela of Adams; two daughters, Patricia Dean and Barbara Ferguson, both of Adams; two stepsons, Bruce Durwin and his wife Carol of Pittsfield and Joseph Durwin and his wife Paula of South Carolina; her daughter-in-law Mary Kondel of Adams; two sisters, Genevieve Ryan of Adams and Blanche Fauverteil of France; seven grandchildren, four step grandchildren, eleven great grandchildren, four step great grandchildren, many nieces and nephews and by her close friends Bud and Nancy Racine. She was predeceased by her son, Michael Kondel, by her son-in-law Joseph Dean and by five brothers and sisters. The funeral will be held on Thursday, April 29th at 10:30 A.M. from the PACIOREK FUNERAL HOME, 13 Hoosac St., Adams, followed by a Liturgy of Christian Burial at 11:00 A.M. in St. Stanislaus Kostka Church, Adams. Burial will follow in St. Stanislaus Cemetery, Adams. Calling hours are Thursday morning from 9:30 A.M. to 10:30 A.M. Due to current restrictions, admittance to the funeral home may take longer than usual and anyone attending must wear a face covering and practice social distancing. Memorial donations may be made to Pop Cares, P.O. Box 482, Williamstown, MA 01267.

Mrs. Veronica (Witkowski) Kondel Durwin, 94, of Adams, died on Saturday, April 24, 2021 at Mount Carmel Care Center in Lenox. She was born in Lodz, Poland on November 4, 1926, a daughter of the late Jean and Clementine (Jablonski) Witkowski.... View Obituary & Service Information

The family of Mrs. Veronica Kondel Durwin created this Life Tributes page to make it easy to share your memories.

Send flowers to the Durwin family.