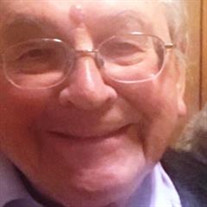 Mr. Thomas I. Prokopowicz, 86, of Adams, died on Saturday, June 15, 2019 at Berkshire Medical Center in Pittsfield. He was born in Susquehanna, PA on July 16, 1932, son of the late Ignatius and Stefania (Madej) Prokopowicz. He attended schools in Pennsylvania and graduated as Valedictorian from Penn State University with his Master’s Degree in Ceramic Engineering. Mr. Prokopowicz worked as a ceramic engineer for the former Sprague Electric Co., North Adams, until its closing in 1989. He then helped in the founding of MRA Laboratories, Adams. He was a communicant of the Parish of St. John Paul II at Notre Dame des Sept Douleurs Church, Adams. He was a member of the Penn State Alumni Association and the American Ceramic Association. He enjoyed gardening, fine dining, reading and politics. His wife, the former Carolyn J. Sweeney, whom he married on June 22, 1968, died on September 11, 2002. He is survived by his two sons, Thomas Prokopowicz and his wife Dawn of Adams and Gregory Prokopowicz of Worcester; two sisters, Irene Rakowski of Williamsville, NY and Lorraine Carabetta of Upper St. Claire, PA; one granddaughter, Jennifer Prokopowicz of Adams and many nieces and nephews. The funeral will be held on Wednesday, June 19th at 9:00 A.M. from the PACIOREK FUNERAL HOME, 13 Hoosac St., Adams, followed by a Liturgy of Christian Burial at 10:00 A.M. in Notre Dame des Sept Douleurs Church, McKinley Square, Adams, celebrated by Rev. Steven Montesanti, Pastor. Burial will follow in Bellevue Cemetery, Adams. Calling hours are Tuesday from 4:00 P.M. to 6:00 P.M. at the funeral home. Memorial donations may be made to the Melbourne Place Sunshine Club, 140 Melbourne Rd., Pittsfield, MA 01201 or to Elder Services Meals on Wheels, 877 South St., Pittsfield, MA 01201.

Mr. Thomas I. Prokopowicz, 86, of Adams, died on Saturday, June 15, 2019 at Berkshire Medical Center in Pittsfield. He was born in Susquehanna, PA on July 16, 1932, son of the late Ignatius and Stefania (Madej) Prokopowicz. He attended schools... View Obituary & Service Information

The family of Mr. Thomas I. Prokopowicz created this Life Tributes page to make it easy to share your memories.

Send flowers to the Prokopowicz family.