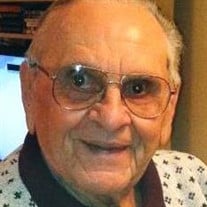 Mr. Thomas A. Koehler, 95, of Adams, died on Wednesday, January 9, 2019 at Williamstown Commons. He was born in Adams on February 11, 1923, a son of the late Arthur and Irene (Goyette) Koehler. He attended schools in Adams and graduated from the former Adams High School with the class of 1941. He was a Veteran of World War II, having served with the United States Navy Merchant Marines until receiving his Honorable Discharge in 1946. Mr. Koehler worked for many years as a salesman for the former Roberts Co., North Adams. Later he worked as a crossing guard for the Adams-Cheshire Regional School District. He was a communicant of the Parish of St. John Paul II at Notre Dame des Sept Douleurs Church, Adams. He was a member of the Adams Post 160 American Legion. He enjoyed all Boston sports and was proud to have attended game one of the 2004 World Series. He is survived by his wife of 72 years, the former Doris J. Fisk, whom he married in November of 1946; three daughters, Sharon Harrison and her husband Jeff of Orange City, FL, Debra Corkins and her husband Jim of Adams and Tracey George and her husband Larry of Debary, FL; six grandchildren, Trevor Swistak, Amy Williams, Corey Swistak, Scott George, Kyle George and Lisa Corkins; four great grandchildren Jacob, Zachary and Brynna Swistak and Ethan Corkins as well as many nieces and nephews. He was predeceased by a grandson Christopher Corkins and by his brother Arthur Koehler. The family would like to thank the staff at Williamstown Commons, especially the Rehab Department for all of the wonderful care they provided to Tom. A graveside service will be held at a later date in the spring. There are no calling hours. Memorial donations may be made to the Parish of St. John Paul II, P.O. Box 231, Adams, MA 01220.

Mr. Thomas A. Koehler, 95, of Adams, died on Wednesday, January 9, 2019 at Williamstown Commons. He was born in Adams on February 11, 1923, a son of the late Arthur and Irene (Goyette) Koehler. He attended schools in Adams and graduated from... View Obituary & Service Information

The family of Mr. Thomas A. Koehler created this Life Tributes page to make it easy to share your memories.

Send flowers to the Koehler family.