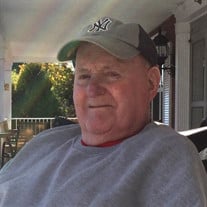 Mr. Thomas H. Horn, Sr., 82, of Adams, died on Sunday morning, December 22, 2019. He was born in Adams on April 4, 1937, a son of the late Joseph and Viola (Taft) Horn. He attended Adams schools, graduating from the former Adams High School with the Class of 1956. He had also attended Springfield College. Tom worked as a plumber for Ouellette Plumbing and Heating in Adams for over 40 years, until retiring. He had also operated his own farm stand on West Road for many years, selling produce that he had grown himself. He enjoyed gardening, was a fan of the New York Yankees, and especially enjoyed spending time with his grandchildren. His wife, the former Elizabeth A. “Betty” Kut, whom he married on January 31, 1959, died on February 23, 2002. He is survived by two daughters, Carleen Horn of Adams, and Lisa Fournier and her husband, Peter, of Cheshire; two sons, Thomas H. Horn, Jr. and his wife, Dawn of Adams, and John Horn and his wife, Kelly, of Adams; seven grandchildren, including Michael Foster and his wife, Laura; Adam Lemoine and his fiancée, Eddie Roireau; Hayden Lemoine, Benjamin Fournier, Noah Fournier, Samantha Horn and Justin Horn; a brother, Harry Horn of Adams; a sister, Beverly Reagan of Keene, NH; and several nieces and nephews. He was predeceased by a brother, Charles Horn; two sisters, Joan Hyndman and Bertha Horn; and by his special niece, Denise Mekdeci. Funeral services and burial will be private. There are no calling hours. Memorial donations may be made to Elder Services of Berkshire County, to benefit their Meals on Wheels Program, at 877 South St. Suite 4 E, Pittsfield, MA 01201. The PACIOREK FUNERAL HOME, Adams, is in charge of arrangements. To leave a message of condolence, please go online to www.paciorekfuneral.com

The family of Mr. Thomas H. Horn Sr. created this Life Tributes page to make it easy to share your memories.

Send flowers to the Horn family.