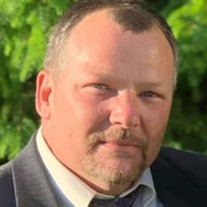 Retired army Sgt. Thomas William Bradley, 53, went on a never-ending fishing expedition on April 17, 2022. Born on March 18, 1969, son to William T Bradley. Tom attended Drury High School in North Adams, graduating in 1987 and then enlisting in the United States Army where he was stationed in Panama for operation Just Cause. Toms most cherished accomplishments were his children, Annaka and Ivan Bradley, Paul and Matthew Bess and his beautiful home. Tom worked for Apex/Spectrum plastics where he was the HMFIC for the last 17 years. He enjoyed being the go-to guy. Tom was a proud veteran. A conservative, who loved to engage in respectful political debates and had always joked about becoming the governor of Vermont. Tom enjoyed reading, gardening and was becoming quite the green thumb, fishing with his children, bird watching, becoming a coffee snob, adding to his patriotic room, attending sporting events and most of all hosting Sunday dinners for his family every week. It was a religious event for Tom. He truly loved and provided for those closest to him. Tom is survived by his father William, brother Randy his wife Lydia and their son Liam of Germany. His children Ivan and his life partner Jessica, Annaka and her significant other Mackenzie (Big Mack), Matthew and his companion Janine and Paul Bess. The mother of his children, Melissa. His significant other Trisha Carlo and her daughter Bella who he had future plans with and who showed him the love and affection he truly deserved. His best friend Don, as well as several friends and other relatives. He was predeceased by his Aunt Rena, his Grandfather Maurice and his beloved grandmother Rose Lucy Cardinal Bradley. “It's not what you take when you leave this world behind you. It's what you leave behind you when you go.” The funeral will be held on Saturday, April 23rd at 12:00 NOON in the PACIOREK FUNERAL HOME, 13 Hoosac St., Adams, MA 01220. Burial will be at a later date. Calling hours are Saturday morning from 10:00 A.M. until the time of the service at the funeral home. Memorial donations may be made to Soldier On, 360 West Housatonic St., Pittsfield, MA 01201.

The family of Mr. Thomas W. Bradley created this Life Tributes page to make it easy to share your memories.

Send flowers to the Bradley family.