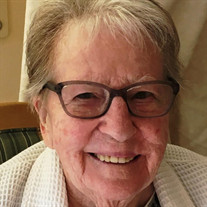 Theresa M Dudek, age 96 of Dalton passed away at Mount Carmel Care Center on Tuesday, March 5th after suffering a stroke in early February. She was the oldest child born to Henry and Melina (Foisy) Louison. Her two siblings Charles Louison and Betty Skorupski preceded her. She was married to Stanley P. Dudek who passed away in 1976. Theresa grew up in Adams, graduated from Notre Dame School and attended Adams High School. Theresa started working at an early age to help support her family during the depression - first as a housekeeper and then in the Berkshire Mills. Later she worked in the lab at Sprague during WWII. After her marriage she worked for nearly 30 years as a practical nurse in various Berkshire County nursing homes, including Richardson's Rest Home, Adams Nursing Home of Adams and Williamstown, Valley View and Edgecombe of Lenox. Theresa and her husband raised their six children in Adams and after his death she moved to Dalton. She also resided at Rose Manor Apartments in Pittsfield. While residing in Adams and Dalton, Theresa and her family welcomed children from the Fresh Air Fund for nearly 18 years. Prior to her stroke she resided with her daughter Daisy in Dalton. Theresa loved to travel, dip her feet into the ocean, ride carousels, go to tag sales and ride to view the fall colors throughout the Berkshires. Always proud of her French Heritage, she visited Paris for her 70th Birthday with her daughters. During her early senior years she spent winters in St. Petersburg, FL and Port Aransas, TX. Theresa was a senior volunteer at Goodwill, The Pittsfield CYC and enjoyed time at the various events at the Senior Center when a resident of Pittsfield. She leaves behind six children - Dianne Frankel and her husband David, John and his partner Brad Parsons, Joseph and his partner Gail Melillo, Peter and his wife Monika, Stanley and his wife Susan, Daisy and grand fur baby Coco, also three grandchildren Eric and his wife Diana, Tara Goldberg and her husband Jonathan, Rachel Crowley and her husband Tim along with five great grandchildren, Jack, Taylor and Ryan Dudek, Travis Napoleoni, and Amelia Goldberg. The funeral will be held on Tuesday, March 12th at 10:30 A.M. from the PACIOREK FUNERAL HOME, 13 Hoosac St., Adams, followed by a Liturgy of Christian Burial at 11:00 A.M. in Notre Dame des Sept Douleurs Church, McKinley Square, Adams, celebrated by Rev. Steven Montesanti, Pastor. Burial will follow in St. Stanislaus Cemetery, Adams. A calling hour will be held on Tuesday morning from 9:30 A.M. to 10:30 A.M. at the funeral home. In lieu of flowers, memorial donations may be made to Elder Services of Berkshire County, 877 South St., Pittsfield, MA 01201 or to The Fresh Air Fund, 633 Third Ave, 14th Floor, New York, NY 10017. To leave a message of condolence, or for directions, please go online to www.paciorekfuneral.com.

The family of Mrs. Theresa M. Dudek created this Life Tributes page to make it easy to share your memories.

Send flowers to the Dudek family.