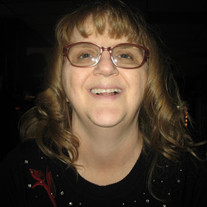 Mrs. Susan M. (Allard) Rondeau, 58, of Stamford, VT, died on Thursday, October 28, 2021, at Berkshire Medical Center in Pittsfield. She was born in North Adams on January 14, 1963, a daughter of the late Bernard and Elizabeth (Harrison) Allard. She attended schools in Adams and graduated from the Charles H. McCann Technical High School with the class of 1981. Mrs. Rondeau worked for the F Schumacher Company at their former Waverly division in Adams and the former J C Penny in North Adams. Known as "Aunt Sue" by many she will be remembered for being loving, caring and motherly to all. She enjoyed candlepin bowling, playing softball, coaching youth soccer and crafting. She was a former member of the Adams Turn Hall and the North Adams Fraternal Order of Eagles. She is survived by her husband, Philip A. Rondeau, whom she married on September 22, 2007; her son, Brian A. Choquette, Jr. and his wife Erin of Longmeadow; two grandchildren, Landon and Julia Choquette; two brothers, Bernard Allard, Jr. of North Adams and Joseph Allard and his wife Diane of Adams; her sister Deborah Levesque of North Adams; two sisters-in-law, Pamela Jozefiak and her husband James of Adams and Erin Ramsey of Pittsfield; a brother-in-law Paul Rondeau of North Adams and many nieces, nephews, great nieces and great nephews. She is predeceased by her brother Wayne Allard, Sr. who died in 2019. The funeral will be held on Friday, November 5th at 7:00 P.M. in the PACIOREK FUNERAL HOME, 13 Hoosac St., Adams. Calling hours are Friday from 4:00 P.M. until the time of the service at the funeral home. Face coverings are required for anyone attending the calling hours and funeral service. Burial will be private at a later date. The family requests the omission of flowers and suggests memorial donations be made to POP Cares, P.O. Box 482, Williamstown, MA 01267.

Mrs. Susan M. (Allard) Rondeau, 58, of Stamford, VT, died on Thursday, October 28, 2021, at Berkshire Medical Center in Pittsfield. She was born in North Adams on January 14, 1963, a daughter of the late Bernard and Elizabeth (Harrison) Allard.... View Obituary & Service Information

The family of Mrs. Susan M. Rondeau created this Life Tributes page to make it easy to share your memories.

Send flowers to the Rondeau family.