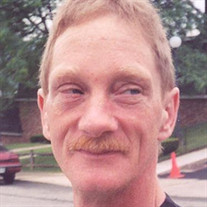 Mr. Steven C. Atwell, 55, of Adams, died Saturday morning, April 13, 2019, at his home. He was born in Pittsfield on November 12, 1963, a son of the late Charles and Carolyn (Lewis) Atwell. He attended Lanesboro schools and Mount Greylock Regional High School. Steve last worked for Wohrle’s Foods in Pittsfield as a truck driver, until retiring 10 years ago. He also worked as a dairy farmer most of his life, and had operated his own farm in Cheshire for many years. He enjoyed gardening and working outdoors, animals, driving his 1969 Volkswagen Beetle, and especially enjoyed farming and tending to his livestock. He is survived by his wife, the former Lory A. Ross, whom he married on October 23, 1987; three sons, Christopher Atwell and his fiancée, Vanessa Boucher; Joshua Atwell and his fiancée, Allie Pansecchi; and Travis Atwell and his fiancée Natasha Bordeaux, all of Adams; three brothers, Dwight Atwell of Adams; Dan Atwell of Lanesboro, and Scott Atwell of Pittsfield; three sisters, Dawn Jayko of Williamstown; Wendy Saldo of North Adams; and Lisa Ostrobinski of Adams; one granddaughter, Grace Biron; as well as several nieces, nephews, grandnieces and grandnephews. Steve’s family would like to thank Cheryl of Berkshire VNA, and Dr. Sean Mullaly, Tammy, and the staff of the Cancer Center at the Hillcrest Campus for the care and kindness they gave him during his illness. Funeral services will be held on Friday, April 19th, at 6:00 PM in the PACIOREK FUNERAL HOME, 13 Hoosac St. Adams. Calling hours are Friday from 4 PM until the service, at the funeral home. Burial will be private at the convenience of the family. Memorial donations may be made to Pop Cares, PO Box 482, Williamstown, MA 01267.

Mr. Steven C. Atwell, 55, of Adams, died Saturday morning, April 13, 2019, at his home. He was born in Pittsfield on November 12, 1963, a son of the late Charles and Carolyn (Lewis) Atwell. He attended Lanesboro schools and Mount Greylock Regional... View Obituary & Service Information

The family of Mr. Steven C. Atwell created this Life Tributes page to make it easy to share your memories.

Send flowers to the Atwell family.