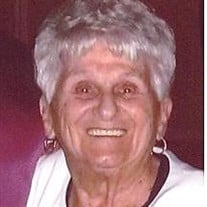 Mrs. Stephanie “Stacia” (Ordyna) Pasternak, 89, of Adams, died on Thursday, September 5, 2019 at her home surrounded by her family. She was born in Adams on July 12, 1930, a daughter of the late John and Felicia (Mikuszewski) Ordyna. She attended schools in Adams and graduated from the former Adams High School. Mrs. Pasternak worked for many years in the Deli of the former Adams Supermarket and the former Big Y Supermarket both in Adams until her retirement. She was a communicant of the Parish of St. John Paul II, Adams. Her husband, John A. Pasternak, whom she married on April 26, 1951, died on November 7, 2002. She is survived by her three daughters, Donna Pasternak of East Greenbush, NY, Susan McLear and her husband Keith of Adams and Julie Wright and her husband Douglas of Adams; her son, David Pasternak and his wife Claudia of Adams; her brother, Joseph Ordyna of Adams; eight grandchildren, six great grandchildren and many nieces and nephews. She was predeceased by four brothers, Casimer and Steven Ordyna and Matthew and Adolf Ciempa and by two sisters, Jennie Haczela and Angie Gilbert. A Liturgy of Christian Burial will be celebrated on Friday, September 13th at 10:00 A.M. in Notre Dame des Sept Douleurs Church, McKinley Square, Adams, celebrated by Rev. Steven Montesanti, Pastor. Burial will be private for the family. There are no calling hours. Memorial donations may be made to Hospice Care in the Berkshire, or Elder Services of Berkshire County, both at 877 South St., Pittsfield, MA 01201.

The family of Mrs. Stephanie "Stacia" Pasternak created this Life Tributes page to make it easy to share your memories.

Send flowers to the Pasternak family.