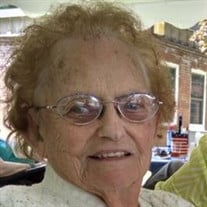 Mrs. Stella Marie (Lemoine) Kondel, 95, of Adams, died on Saturday, February 22, 2020 at Mt. Carmel Care Center in Lenox. She was born in Adams on February 5, 1925, a daughter of the late Peter and Antoinette (Leonard) Lemoine. She attended schools in Adams. Mrs. Kondel last worked for Waverly Fabrics in Adams from 1978 until her retirement in 1987 after being a homemaker for 18 years. Earlier she had worked for the former Sprague Electric Co., North Adams and the former Arnold Print Works, Adams. She was a communicant of the Parish of St. John Paul II at Notre Dame des Sept Douleurs Church, Adams, where she was a member of the choir for many years. She was also a member of the Ladies of St. Anne. Her husband, Edward M. Kondel, whom she married on June 13, 1953, died on April 7, 2015. She is survived by two sons, Gregory Kondel and his wife Virginia of North Adams and David Kondel and his wife Karen of Cheshire; three daughters, Anne Marie Kondel-Long and her husband Rodney of Adams, Carol Kondel of Adams and Elizabeth Deegan and her husband John of Hopewell Junction, NY; three grandchildren, Nicole Gross of Groton, MA, Carly Kondel of Cheshire and Jonathan Deegan of New York; two great grandchildren, Cooper and Crew Sunyar; one sister, Theresa Comeau, one brother, Raymond Lemoine and his wife Jean and many nieces and nephews. The family would like to extend a special thank you to the staff at Mt. Carmel Care Center. The funeral will be held on Thursday, February 27th at 10:30 A.M. from the PACIOREK FUNERAL HOME, 13 Hoosac St., Adams, followed by a Liturgy of Christian Burial at 11:00 A.M. in Notre Dame des Sept Douleurs Church, celebrated by Rev. Steven Montesanti, Pastor. Burial will follow in Bellevue Cemetery, Adams. Calling hours are Thursday morning from 8:30 A.M. to 10:30 A.M. at the funeral home. Memorial donations may be made to the Mt. Carmel Care Center Activity Fund, 320 Pittsfield Rd., Lenox, MA 01240.

Mrs. Stella Marie (Lemoine) Kondel, 95, of Adams, died on Saturday, February 22, 2020 at Mt. Carmel Care Center in Lenox. She was born in Adams on February 5, 1925, a daughter of the late Peter and Antoinette (Leonard) Lemoine. She attended... View Obituary & Service Information

The family of Mrs. Stella M. Kondel created this Life Tributes page to make it easy to share your memories.

Send flowers to the Kondel family.