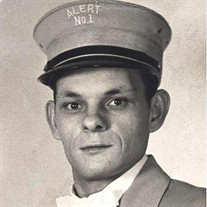 Mr. Stanley Francis Paciorek, 77, of Adams, died Tuesday afternoon, August 14, 2018, at Berkshire Medical Center in Pittsfield. He was born in Adams on March 5, 1941, a son of the late Stanley C. and Mildred K. (Srama) Paciorek. He attended St. Stanislaus Elementary School, and graduated from the former Adams High School with the Class of 1960. Stanley worked briefly at the former Sprague Electric Co. in North Adams. He then began working at General Electric Co. in Pittsfield, first as a winder in the Power Transformer division, and later in the Maintenance Dept. in the Ordnance Division, until retiring in 1996. He then became the Sexton of St. Stanislaus Kostka Cemetery in Adams, a position he held until his passing. He had also worked part-time at the former Albert’s Hardware in Adams for many years. A longtime Adams firefighter, he was elected to membership in the Alert Hose Company on October 6, 1970, and retired as an active member on May 6, 2014, then becoming an Honorary Member of the company. He was a communicant of the Parish of St. John Paul II at St. Stanislaus Kostka Church, Adams, where he was involved in maintenance on all of the church properties for many years. He served as a collector and usher for many years, and was a member of the St. Stanislaus “Grotto Crew”, which constructed the Shadow of the Cross Grotto in St. Stanislaus Cemetery in the early 1970’s. He is survived by his wife, the former Madeline R. Tassone; one son, John S. Paciorek of Adams; two daughters, Christina Paciorek of West Springfield, and Carla Thomas of Adams; two grandchildren, Monica and Dylan; one brother, Daniel Paciorek of Adams; one sister, Virginia Paciorek of Adams; as well as several nieces, nephews and cousins. The funeral will be held on Monday, August 20th, at 9:00 AM from the PACIOREK FUNERAL HOME, 13 Hoosac St. Adams, followed by a Liturgy of Christian Burial at 10:00 AM in St. Stanislaus Kostka Church, Adams, celebrated by Rev. A. Peter Gregory, Pastor Emeritus of St. Charles Church, Pittsfield. Burial will follow in St. Stanislaus Kostka Cemetery, Adams. Calling hours are Sunday afternoon from 2 to 5 PM at the funeral home. Memorial donations may be made to Shriners Burns Institute, 51 Blossom St. Boston, MA 02114 (www.shrinershospitalsforchildren.org) or to St. Stanislaus School, 108 Summer St. Adams, MA 01220. To leave a message of condolence, please go online to www.paciorekfuneral.com

The family of Mr. Stanley F. Paciorek created this Life Tributes page to make it easy to share your memories.

Send flowers to the Paciorek family.