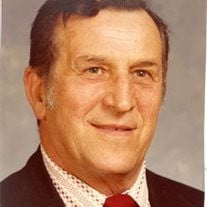 Mr. Stanley Henry Leja, 89, of 44 East Hoosac Street, Adams, died Thursday evening at North Adams Regional Hospital. He was born in Adams on September 16, 1917, a son of the late John and Mary (Banas) Leja, and attended Adams schools. He was a Veteran of World War II, serving with the 93rd Chemical Mortar Division of the US Army in the European Theater, until his Honorable Discharge as a Sergeant on November 29, 1945. Mr. Leja worked as a loom fixer at the former Berkshire Fine Spinning Co. in Adams until the mill ceased operations in 1957. He then worked at the former A & P Supermarkets in Pittsfield and North Adams, until retiring as produce manager in 1980 after 23 years of service. He was a communicant of St. Stanislaus Kostka Church, Adams. He was a member of Adams Post 160 American Legion, Dr. George L. Curran Post 996 Veterans of Foreign Wars, North Adams; the Northern Berkshire Retired Men's Club and Forest Park Country Club in Adams. He enjoyed golfing and bowling. He is survived by his wife of 60 years, the former Mary H. Banas, whom he married on October 12, 1946; 2 Daughters - Linda Bassi and her husband, Michael, and Patricia Lemoine and her husband, David, both of Adams; 2 Grandsons - Brad Bassi of Eugene, Oregon, and David Lemoine, Jr. of Adams; 2 Brothers - Thaddeus Leja of Adams, and Ernest Leja of Henderson, Nevada; 2 Sisters - Helen Lubowicz and Felicia Skowronski, both of Adams; and several nieces, nephews, grandnieces & grandnephews. He was predeceased by 1 brother, Frank Leja, and by 3 sisters - Sophie Kalisz, Veronica Starsiak and Cecelia Frodyma. The funeral will be held on Tuesday, October 3rd, at 10:00 AM from the AUGE-PACIOREK-SIMMONS Funeral Home, 13 Hoosac St. Adams, followed by a Liturgy of Christian Burial at 11:00 AM in St. Stanislaus Kostka Church, Adams, celebrated by Rev. Daniel J. Boyle, Pastor of the Catholic Parishes of Adams. Burial will follow in St. Stanislaus Kostka Cemetery, Adams. Calling hours are Monday, October 2nd, from 4 to 7 PM at the funeral home. Memorial donations may be made to St. Stanislaus Church, or to the VNA & Hospice of Northern Berkshire, through the funeral home.

The family of Stanley H. Leja created this Life Tributes page to make it easy to share your memories.

Send flowers to the Leja family.