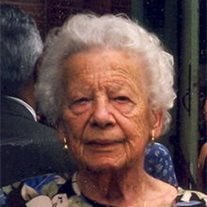 Mrs. Sophie (Leja) Kalisz, 94, of 16 Siara St. Adams, died Monday evening at North Adams Regional Hospital. She was born in Adams on September 13, 1911, a daughter of the late John and Mary (Banas) Leja, and attended St. Stanislaus Kostka School. Mrs. Kalisz was a homemaker most of her life, but had worked for several years as a weaver at the former Berkshire Fine Spinning Co. in Adams. She was a communicant of St. Stanislaus Kostka Church, Adams, and was a member of the St. Stanislaus Rosary Sodality. She enjoyed cooking, gardening and sewing. Her husband, Henry J. Kalisz, whom she married on October 5, 1931, died on September 5, 1998. She is survived by 1 Son - Henry J. Kalisz and his wife, Carole, of Williamstown; 1 Daughter - Marcella A. Kalisz of Adams; 2 Sisters - Felicia Skowronski and Helen Lubowicz, both of Adams; 3 Brothers - Stanley Leja and Thaddeus Leja, both of Adams, and Ernest Leja of Henderson, Nevada; 2 Grandchildren - John Kalisz and his wife, Jaime, of New Lebanon, New York, and Mary Boyle and her husband, Alex, of Mt. Vernon, New York; 1 Great Grandson - Gabriel John Kalisz of New Lebanon, New York; and several nieces, nephews, grandnieces & grandnephews. She was predeceased by a brother, Frank Leja, and by 2 Sisters - Cecelia Frodyma and Veronica Starsiak. The funeral will be held on Saturday, July 8th, at 9:00 AM from the AUGE-PACIOREK-SIMMONS Funeral Home, 13 Hoosac St. Adams, followed by a Liturgy of Christian Burial at 10:00 AM in St. Stanislaus Kostka Church, Adams. Burial will follow in St. Stanislaus Kostka Cemetery, Adams. Calling hours are Friday from 4 to 7 PM at the funeral home. Members of the St. Stanislaus Rosary Sodality will meet at the funeral home on Friday at 3:40 PM to recite the rosary and pay their respects. Memorial donations may be made to St. Stanislaus School through the funeral home.

The family of Sophie L. Kalisz created this Life Tributes page to make it easy to share your memories.

Send flowers to the Kalisz family.