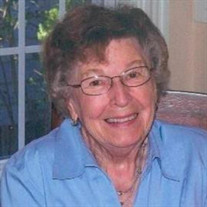 Mrs. Sophia "Sophie" C. (Mikutowicz) Dabrowski, 97, of Adams, passed away peacefully on Monday, February 7, 2022, at Kimball Farms Nursing Center in Lenox. She was born in Westboro, MA on August 4, 1924, a daughter of the late John and Mary (Wojtaszek) Mikutowicz. Sophie moved to Adams with her siblings at the age of six to live with her maternal grandparents, Henry and Sophie Wojtaszek. She attended St. Stanislaus Kostka School and graduated Pro Merito from the former Adams High School. During World War II Mrs. Dabrowski worked for the Rationing Board and later took a position as a clerk for the former Welfare Department in the Adams office until her retirement. She was a communicant of the Parish of St. John Paul II at St. Stanislaus Kostka Church, Adams. She was an excellent seamstress and a proficient knitter. She also enjoyed traveling abroad with her Aunt Ceil and occasional trips to Mohegan Sun. Her husband, Fred J. Dabrowski, Jr., whom she married on February 23, 1946, died on June 2, 1986. Sophia was a beloved mother, grandmother and great grandmother. She is survived by one son David Dabrowski and his companion, Laurie Bard of Adams; four daughters, Carolyn Dabrowski Manning of West Hartford, CT, Dianne Dabrowski and her husband John Ferri of Big Lake, AK, Mary Farrell and her husband Jim of Pownal, VT and Kathryn Dabrowski Russiello of Vienna, VA; ten grandchildren, Nicholas, Jacob and Tyler Dabrowski, Jeff and Brian Manning, Marissa and Bradley Farrell, and Matthew, Andrew and Ian Russiello; seven great grandchildren, Jordan, Nolan, Hannah, Liza, James. Mark and William; she is also survived by many nieces, nephews, and cousins. She was predeceased by her two brothers, Walter and Joseph Mikutowicz and by her sister Helen Wilk. The family would like to thank the staff at Kimball Farms, Windermere Unit, especially Bri, Liz, Aukeya, Fiona and Katelyn, for the wonderful and compassionate care they provided. The funeral will be held on Wednesday, February 16th at 9:00 A.M. from the PACIOREK FUNERAL HOME, 13 Hoosac St., Adams, followed by a Liturgy of Christian Burial at 10:00 A.M. in St, Stanislaus Kostka Church, Adams. Burial will follow in St. Stanislaus Cemetery. Calling hours are Tuesday from 5:00 P.M. to 7:00 P.M. at the funeral home. Face coverings are required for anyone attending. Memorial donations may be made to the St. Stanislaus School, 108 Summer St., Adams, MA 01220.

Mrs. Sophia "Sophie" C. (Mikutowicz) Dabrowski, 97, of Adams, passed away peacefully on Monday, February 7, 2022, at Kimball Farms Nursing Center in Lenox. She was born in Westboro, MA on August 4, 1924, a daughter of the late John and Mary... View Obituary & Service Information

The family of Mrs. Sophia C. Dabrowski created this Life Tributes page to make it easy to share your memories.

Send flowers to the Dabrowski family.