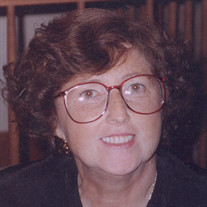 Mrs. Shirley Eileen (Radaelli) Neveu, 85, of Adams, died on Wednesday, February 5, 2020 at Hillcrest Commons in Pittsfield. She was born in North Adams on September 22, 1934, daughter of the late Ferdinando and Theresa (O’Hare) Radaelli. She attended schools in North Adams and graduated from the former St. Joseph’s High School with the class of 1952. She and her husband Robert F. Neveu exchanged marriage vows in St. Francis of Assisi Church, North Adams, on August 11, 1956. After their marriage they moved to Springfield and in 1959, then moved to Westfield before retiring to the Berkshires in 2000. While living in North Adams, Shirley had worked for the former Windsor Print Works until it closed. After raising her three wonderful sons in Westfield, Shirley was employed in the office of the Westfield Adjustment and Appraisal Company. In 1977 she joined the office of the Massachusetts Migrant Education Program in Holyoke, retiring in 1989. While living in Westfield, she was a member of the Sons of Erin Women’s Auxiliary and their golf league, a member of the Westfield Democratic City Committee, the Westfield Jaycettes, the Westfield Concerned Citizens, the Westfield High Band Parents Group and the Agawam Lioness. Shirley enjoyed being a Room Mother for all three sons and being a Cub Scout Den Mother. She enjoyed special time with her grandchildren, tole painting, sailing, traveling and reading. She was a communicant of the Parish of St. John Paul II at Notre Dame des Sept Douleurs Church, Adams. She is survived by her husband of 63 years, Robert F. Neveu; her three sons, Alan Neveu of Adams, Mark Neveu and his wife Jacqueline of Ludlow and Craig Neveu and his wife Catherine of Westfield; two loving grandchildren, Kayla and Nathan Neveu, both of Westfield; three brothers, Charles “Chuck” Radaelli and his wife Lucille of Albuquerque, NM, Thomas “Chip” Radaelli of Corrales, NM and Michael Radaelli and his wife Melinda of Rio Rancho, NM; and by several nieces, nephews, grandnieces and grandnephews. The funeral will be held on Saturday, February 8th at 8:45 A.M. from the PACIOREK FUNERAL HOME, 13 Hoosac St., Adams, followed by a Liturgy of Christian Burial at 9:00 A.M. in Notre Dame des Sept Douleurs Church, McKinley Square, Adams, celebrated by Rev. Steven Montesanti, Pastor. Burial will follow in Bellevue Cemetery, Adams. Calling hours are Saturday morning from 8:00 A.M. to 8:45 A.M. at the funeral home. The family requests the omission of flowers.

Mrs. Shirley Eileen (Radaelli) Neveu, 85, of Adams, died on Wednesday, February 5, 2020 at Hillcrest Commons in Pittsfield. She was born in North Adams on September 22, 1934, daughter of the late Ferdinando and Theresa (O&#8217;Hare) Radaelli. She... View Obituary & Service Information

The family of Mrs. Shirley E. Neveu created this Life Tributes page to make it easy to share your memories.

Send flowers to the Neveu family.