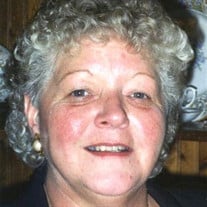 Mrs. Sandra (Bennett) Delorey, 77, of Adams, died on Thursday, June 7, 2018 at Berkshire Medical Center in Pittsfield surrounded by loved ones. She was born in Adams on September 28, 1940, a daughter of the late Harold and Ruth (Tinney) Bennett. She attended schools in Cheshire and Adams and graduated from the former Adams Memorial High School with the class of 1958. Mrs. Delorey was a home daycare provider for many years until she retired at which time she became a Foster Mother for many children. She worked part time as a tax preparer and as an Avon Representative. She enjoyed being with children of all ages, being in the outdoors camping, fishing and vegetable gardening and being as self-sufficient as possible. She is survived by a daughter, Robin Potter of Canton, MA; three sons, Raymond Potter of Lynn, MA, Kevin Potter of Adams and Christopher Delorey of Adams; two sisters, Jane Simpson of East Boston and Elizabeth Gilcrest of Arlington, VA; five grandchildren, CJ Delorey, Autumn Rose Delorey and Cody, Dylan and Rebecca Potter; her foster child whom she considered a daughter and is part of the family, Kishsa Carnes and her daughter Arianna of North Adams; as well as many nieces and nephews. She has also left many who called her Ma and considered her family. She was predeceased by her brother Bruce Bennett. The funeral will be held on Monday, June 11th at 6:00 P.M. in the PACIOREK FUNERAL HOME, 13 Hoosac St., Adams. Burial will be at a later date at the convenience of the family. Calling hours are Monday from 3:00 P.M. until the time of the service in the funeral home. Memorial donations may be made to Elder Services of Berkshire County Inc., 877 South St., Pittsfield, MA 01201

Mrs. Sandra (Bennett) Delorey, 77, of Adams, died on Thursday, June 7, 2018 at Berkshire Medical Center in Pittsfield surrounded by loved ones. She was born in Adams on September 28, 1940, a daughter of the late Harold and Ruth (Tinney)... View Obituary & Service Information

The family of Sandra B. Delorey created this Life Tributes page to make it easy to share your memories.

Send flowers to the Delorey family.