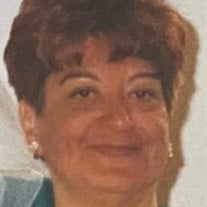 Rosanne B. (Gentile) Marsh, 80, of North Adams, died on Friday, May 13, 2022, at Lee Healthcare. She was born in North Adams on May 6, 1942, daughter of the late Angelo “Kippy” and Anne (Allocco) Gentile. She attended schools in North Adams and graduated from Drury High School. Rosanne last worked as a cashier for the Big Y Supermarket in North Adams until retiring in 2013. Earlier she had worked for the former Sprague Electric Co. and the former A-OK. She was a communicant of St. Elizabeth of Hungary Church, North Adams. She is survived by her son Christopher Marsh and his wife Angelique of Pittsfield; two daughters, Anne Marie Brostek and her husband Edward of Wadena, MN and Michele Angela Sawyer and her husband Richard of Lead Hill, AR; her brother Richard Gentile and his wife Bernadette of Cheshire; nine grandchildren, Cody, Kayla, Victoria, Kobe, Angela, Elizabeth, Matthew, Carson and Catryna and by her nephew Vincent Gentile. The funeral will be held on Thursday, May 26, at 8:45 A.M. from the PACIOREK FUNERAL HOME, 13 Hoosac St., Adams, followed by a Liturgy of Christian Burial at 10:00 A.M. in St. Elizabeth of Hungary Church, North Adams. Burial will follow in Southview Cemetery, North Adams. Calling hours are Wednesday from 4:00 P.M. to 7:00 P.M. at the funeral home. Memorial donations may be made to the Spitzer Senior Center, 116 Ashland St., North Adams or to the Shriners Hospital for Children, 516 Carew St, Springfield, MA 01104.

The family of Rosanne B. Marsh created this Life Tributes page to make it easy to share your memories.

Send flowers to the Marsh family.