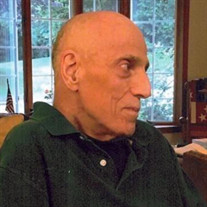 Ron Smachetti died peacefully at home on August 15, 2020, from complications of Hypokalemic Paralysis. Born in Adams, Massachusetts on September 11, 1942, to Philomena and Steve Smachetti, he attended Adams Schools, graduating from Adams Memorial High in 1961. He pursued degrees from Wentworth Institute in Boston and the State University of New York, Oswego. A lifelong teaching career began in Industrial Arts in New York state, and Ron returned to the Berkshires in 1967 to begin his thirty-four-year career at Drury High School in North Adams. During his tenure at Drury, Ron taught a wide variety of math courses in addition to chairing the department. Being an adjunct professor at MCLA for twenty years gave him an opportunity to further share his passion for mathematics. In 1973, he received his first Master’s Degree in Education from Massachusetts College of Liberal Arts and three years later a Master of Arts in Teaching from Auburn University in Alabama. During a later sabbatical, Ron studied at Boston University. Ron is survived by his wife of fifty-two years, Madeleine (Jones), his daughter Kate, her husband Jason Fitterling and their sons Matthew and Jack of Rumford, RI, and his daughter Lauren Smachetti of Adams. He also leaves a sister Carol Cromwell, her spouse Sis Bronson of Buffalo, NY, and brother Stephen and wife Ellen of North Adams. Throughout his life, Ron met the challenges he encountered with determination, creativity and skillful manipulation. A thirty-year battle with Hypokalemia, a neuro-muscular condition that over time reduced muscle strength and his ability to walk prompted alternative pathways to retain fitness and mobility when the common course wasn’t possible. Instead of standing to exercise, he swam a minimum of a mile daily for many years. As walking became impossible, Ron used a wheel chair, motorized scooter and even learned to drive a handicapped-accessible van to provide the means and opportunity to live normally. During his final years he continued to attend church services, exercise sessions and family outings. Ron welcomed the attention and antics of his grandchildren and had a lifelong fan’s patience for the Auburn Tigers and all Boston sports teams. A Liturgy of Christian Burial will be celebrated on Friday, August 21st, at 10:00 AM in Notre Dame des Sept Douleurs Church, McKinley Square, Adams. Burial will follow in Bellevue Cemetery, Adams. There are no calling hours. Due to current public health regulations, social distancing and wearing of face masks will be strictly enforced at the church and cemetery. Ron’s family appreciates the caring, knowledgeable staff of HospiceCare in the Berkshires, Inc. In his memory, contributions may be sent to HospiceCare in the Berkshires, 877 South Street, Suite 1W, Pittsfield, MA 01201. The PACIOREK FUNERAL HOME, Adams, is in charge of arrangements. To leave a message of condolence, please go online to www.paciorekfuneral.com

The family of Mr. Ronald S. Smachetti created this Life Tributes page to make it easy to share your memories.

Send flowers to the Smachetti family.