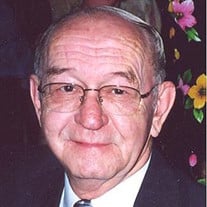 Mr. Ronald Robert Anderson, 80, of Cheshire, died on Monday, June 18, 2018 at Berkshire Medical Center in Pittsfield. He was born in Adams on August 13, 1937, a son of the late Lawrence and Selma (Knechtel) Anderson. He was educated in the Adams schools and graduated from the former Adams Memorial High School. Ronald served in the National Guard for three years. Mr. Anderson was employed by Pfizer Inc., as a fireman and a kiln tender in the Adams plant since 1962 for 31 years. Then the company changed over in 1992 as Specialty Minerals where he worked for three more years, retiring in 1995 with 33 years of service. At that time he moved to Florida and became a resident for 20 years, coming up North for the summer. In 2015 the Anderson family decided to permanently return to the Berkshires. One of Ron’s favorite hobbies was drag racing at Lebanon Valley. In the beginning he would race for trophies. Then it became a bigger sport by building his own race car, a 1966 Caprice station wagon named “Knock on Wood”. This car became a favorite in its class, holding the title and winning for money. As time went on Ron sold his winning car and started new hobby, building a home for his family by designing and laying out a blueprint of a new home. Hammer and nails in came together until it was built. He is survived by his wife, the former Wanda H. Jaskalka, whom he married on September 20, 1969 in St. Stanislaus Church, Adams; two granddaughters, Alyssa and Kaitlyn Anderson; his sister-in-law, Alice Jaskalka of North Adams, and many nieces and nephews. He was predeceased by his son, Dennis Edward Anderson, by one brother, Lawrence Anderson and by two sisters, Marlyn Gaffey and June Leonesio. A Liturgy of Christian Burial will be celebrated on Monday, June 25th at 10:00 A.M. in St. Mary of the Assumption Church, Cheshire, celebrated by Rev. Matthew Guidi, Pastor. Burial will follow in St. Stanislaus Kostka Cemetery, Adams. Calling hours are Monday from 9:30 A.M. until 10:00 A.M. at St. Mary of the Assumption Church. Memorial donations may be made to St. Mary of the Assumption, 159 Church St., Cheshire, MA 01225.

Mr. Ronald Robert Anderson, 80, of Cheshire, died on Monday, June 18, 2018 at Berkshire Medical Center in Pittsfield. He was born in Adams on August 13, 1937, a son of the late Lawrence and Selma (Knechtel) Anderson. He was educated in... View Obituary & Service Information

The family of Mr. Ronald R. Anderson created this Life Tributes page to make it easy to share your memories.

Send flowers to the Anderson family.