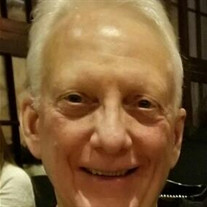 Mr. Rodney F. Puppolo, 63, of Adams, died Monday morning, September 9, 2019, at Tufts Medical Center in Boston. He was born in Adams on September 3, 1956, a son of Elaine D. (Wnuk) Puppolo and the late Michael G. Puppolo. He attended Adams schools, and graduated from Hoosac Valley High School with the Class of 1974. Rod worked as an estimator for L.P. Adams Co. in Dalton for the past 10 years. Earlier, he had worked as an outside sales representative for the former H. Greenberg & Son Home Center in North Adams for many years. He enjoyed cooking, golfing, visiting wineries and breweries, attending wine tastings, and a glass of good bourbon. Besides his mother, Elaine Puppolo, of Adams, he is survived by his wife of 29 years, the former Lisa M. Krok, whom he married on May 18, 1990; two daughters, Abby Self and her husband, Steve, of Westfield, Indiana; and Kasey Puppolo and her companion, Cory Gallup, of Pensacola, Florida; two brothers, Perry Puppolo and his wife, Erin, of Lincoln University, PA; and Gary Puppolo and his wife, Lisa, of Adams; his beloved cats, Chile and Pepper; as well as several nieces and nephews. The funeral will be held on Friday, Sept. 13th, at 3:00 PM in the PACIOREK FUNERAL HOME, 13 Hoosac St. Adams. Calling hours will be Friday from 1:00 PM until the service, at the funeral home. Burial will be private. In lieu of flowers, memorial donations may be made to the Alert Hose Company, 3 Columbia St. Adams, MA 01220, or to the Adams Ambulance Service, 185 Columbia St. Adams, MA 01220. To leave a message of condolence, please go online to www.paciorekfuneral.com

The family of Mr. Rodney F. Puppolo created this Life Tributes page to make it easy to share your memories.

Send flowers to the Puppolo family.