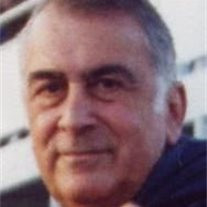 Rocco Phillip Trimarchi, 71, of 1 Berkshire Square, Adams, a longtime North Adams firefighter, died Saturday morning at his home. He was born on North Adams on March 30, 1934, a son of the late Rocco M. and Raffaella (Burro) Trimarchi, and attended North Adams schools, graduating from Drury High School. He also completed the Fire Science program at Berkshire Community College in Pittsfield. He was a Veteran of the Korean Conflict, serving with the US Navy Seabees. Mr. Trimarchi first worked at Sprague Electric Co. in North Adams for 16 years, and had also been a driver for the former Mohawk Ambulance Service in North Adams. He became a reserve firefighter with the North Adams fire Department on May 1, 1964, and was appointed a permenant firefighter on January 14, 1967 and served as driver of the ladder truck and as mechanic. He retired on June 30, 1993 after 29 years of service. He had also been a First Aid instructor at the former North Adams State College. He was a communicant of St. Francis of Assisi Church, North Adams, where he served as Eucharistic Minister and Confraternity of Christian Doctrine instructor. He was a member of North Adams Firefighter's Local 1781 of the International Association of Firefighters, where he served on the Fireman's Ball committee and helped conduct its annual Muscular Dystrophy fund drives. He was a former member of Frank R. Stiles Post 125 American Legion, North Adams. He is survived by his wife of 33 years, the former Joanne P. Tassone, whom he married on April 14, 1972; 3 Sons - Phillip Trimarchi and Rocco Trimarchi II, both of South Daytona, Florida; and Christopher Pierce of Adams; 3 Daughters - Mary Fischer of Franklin, Wisconsin; Susan Simon of Bath, Pennsylvania, and Sheryl Chaput of Cheshire, MA; 2 Brothers - Milano Trimarchi of Clarksburg, and Donald Trimarchi of Williamstown; 1 Sister - Emily Fimmano of Venice, Florida; 10 Grandchildren, and several nieces, nephews, grandnieces & grandnephews. The funeral will be held on Tuesday August 23rd, at 9:45AM from the AUGE-PACIOREK-SIMMONS Funeral Home, 13 Hoosac St. Adams, followed by a Liturgy of Christian Burial at 11:00AM in St. Francis of Assisi Church, North Adams, celebrated by Rev. Christopher J. Waitekus, Pastor of the Catholic Churches of North Adams. Burial will follow in Southview Cemetery, North Adams. Calling hours are Monday from 4:00PM to 7:00PM at the funeral home. Memorial donations may be made to Shriners Hospital for Children through the funeral home.

Rocco Phillip Trimarchi, 71, of 1 Berkshire Square, Adams, a longtime North Adams firefighter, died Saturday morning at his home. He was born on North Adams on March 30, 1934, a son of the late Rocco M. and Raffaella (Burro) Trimarchi, and... View Obituary & Service Information

The family of Rocco P. Trimarchi created this Life Tributes page to make it easy to share your memories.

Send flowers to the Trimarchi family.