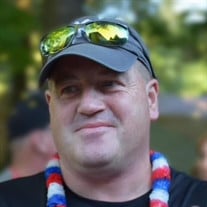 Mr. Robert A. Hillard, Jr., 48, of Adams, died on Friday, July 23, 2021, at his home. He was born in North Adams on September 14, 1972, son of Sandra (Montgomery) Hillard and the late Robert A. Hillard, Sr. He attended schools in North Adams and graduated from the Charles H. McCann Technical High School in the electrical program. At the time of his death, Bob was employed as a salesman for McAndrews-King in Adams. He was also an entrepreneur and jack of all trades, doing things he loved, such as booking vacations for family and friends to cell phone screen repair. He was a big family man who loved spending time with his family and friends. He enjoyed fishing, camping, traveling, casinos, his Hummer and all electronics. He loved to gamble, especially at “Ticket Night” with his close friends. Bob was known and loved by everyone and couldn’t go anywhere without seeing someone he knew. He was also the biggest Trump supporter. Besides his mother of Adams, he is survived by his sister Michelle Hillard of North Adams; his spouse of 18 years, Lori Garvie of Adams; four sons, Robert A. Hillard, III of North Adams, Michael DiSanti of Denver, CO, Zachary Hillard and his wife Megan of North Adams and Bailey DiSanti of Adams; his step children, Heather Garvie of Boston, Hayley Garvie of North Adams and Brad Garvie of Adams; three grandchildren Kylie Rose, Karsen and Haven; his nephew Colton Delisle; his in-laws William and Bonnie Cyrulik and by his best friends, David & Gabrielle Murach and their children, whom he considered his nieces and nephews. He also leaves his beloved cats Sofie and Bandit. He was predeceased by his brother Robert Curtis. Calling hours at the PACIOREK FUNERAL HOME, 13 Hoosac St., Adams, are Friday, August 6th from 4:00 P.M. to 7:00 P.M. Funeral services will be private; however, a celebration of life will be held at a later date. Memorial donations may be made to Soldier On, 360 West Housatonic St, Pittsfield, MA 01201.

The family of Mr. Robert A. Hillard, Jr. created this Life Tributes page to make it easy to share your memories.

Send flowers to the Hillard, family.