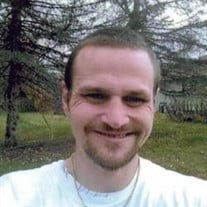 Robert Scott “Scotty” Dufur, 37, of Adams, died Friday, February 26, 2021. He was born in North Adams on September 1, 1983, the son of Robert Dufur, Jr. and Gladys Dudziak. He attended Adams schools, including Hoosac Valley High School. Scotty last worked as a mason’s helper in the construction industry. He enjoyed fishing, camping, bowling and playing horseshoes. He enjoyed watching LA Raiders football.He is survibved by his mother, Gladys Dudziak of Adams; his father and stepmother, Robert Dufur, Jr. and Michelle Dufur of Clarksburg; three brothers, Shaun Dufur and Mikey Fillion, both of Adams, and Adam Dufur of the State of Florida; one sister, Amanda Marceau of the State of Florida; his paternal grandfather, Robert Dufur, Sr. of Lanesboro; his aunts and uncles, including Guy Dudziak (Terri) of Adams; Mary Ann Manning (Brian Carlow) of Savoy; Christine Kucka (Ed) of Lanesboro; Dan Dufur (Kim) of Adams; and Diana Dufur of Lee; his niece, Taylor, and nephews Austin, Sabastian and R.J. and several cousins. He was predeceased by his [paternal grandmother, Bonnie Dufur, and by his maternal grandparents, Thaddeus and Frances Dudziak. A memorial service will be held on Sunday, March 14th, at 12 Noon in the PACIOREK FUNERAL HOME, 13 Hoosac St. Adams. A calling hour will be held from 11:00 AM until 12 Noon at the funeral home. Burial will be private. Due to current regulations, use of face masks and social distancing will be strictly enforced. Occupancy to the funeral home is limited due to state regulations, so we ask your patience as admittance may take a bit longer than usual. To leave a message of condolence, please go online to www.paciorekfuneral.com

The family of Robert "Scotty" Dufur created this Life Tributes page to make it easy to share your memories.

Send flowers to the Dufur family.