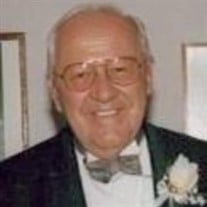 Robert “Bob” C. Armata passed away on March 16, 2022. He was born in Adams on January 1, 1938 to Casimer J. Armata and Gladys V. (Ramocki) Armata. Bob attended Adams High School where he played football and basketball. He was a huge admirer of his basketball coach, Chet Zabek, who he always said taught him so much more than the game. Bob then became the first member of his family to attend college and spent the next four years studying at Colgate University where he was accepted into the Delta Kappa Epsilon fraternity and developed lifelong friendships. Bob spent his career in the insurance industry. He began his journey with Aetna, in Albany, NY and in 1969, he became a partner in the former Coakley, Pierpan, Dolan & Armata Insurance Agency in North Adams. During his 10 years with CPD&A, Bob served as president of the Independent Insurance Agents of Massachusetts and as a member of the Governor’s Select Committee on Auto Insurance reform. He was also a member of the advisory committees of the Aetna, Hartford, Covenant, Commercial Union, Ina and Continental Insurance companies. Bob was an eloquent communicator and was invited as a guest speaker at many insurance forums over the years. Bob contributed locally with a number of organizations, such as Rotary and the Regional School Planning Board. He chaired the Fall Foliage Festival and was involved in Northern Berkshire United Community Services. In 1980, Bob joined Covenant in Hartford, CT as Executive Vice President of Marketing and finished his career as a partner with Brewer & Lord in Boston. To keep busy in retirement, Bob branched out to other interests. While living in Florida, he worked as a docent at the Sarasota County Botanical Gardens. After moving back to the Berkshires, he once again became involved in local activities and became an advocate for elderly housing in Stamford, VT, worked with the Susan B. Anthony Birthplace Museum on their expansion efforts, volunteered at the Clark Art Museum and provided a sounding board to many other people and organizations. Bob loved to travel and experience new environments, and had a deep passion for history, and learning, in general. His curiosity led him to many adventures, both within the U.S. and abroad. Bob had a passion for sports with incredible recall and enjoyed a hot debate with anyone willing to take up the challenge. He proudly coached a North Adams under-dog summer basketball team to the top and was a constant and vocal presence at his daughters’ teams and local games. Bob leaves his daughters by his first wife, Arlene J. Armata; Kathryn Armata (David), Barbara Armata (Eric) and Donna A. Sanford. He was the much loved Dzia Dziu to Skylar Sanford. Bob was very fortunate to reconnect with Carol (Wol) Romaniak, leading to a 19 year marriage. Bob cherished his relationships with Carol and her sons, Thomas (Anne) and Mitchell (Christine) and his step-grandchildren Kelsey Knobel (Ben), Cali and Drew Romaniak . He will be missed by all of us. Bob is remembered lovingly by his brother and sister-in-law Thomas A. Armata and Mary Armata, and many nieces, nephews and friends. The funeral will be held on Wednesday, March 23rd, at 10:00 AM from the PACIOREK FUNERAL HOME, 13 Hoosac St. Adams, followed by a Liturgy of Christian Burial at 11:00 AM in St. Stanislaus Kostka Church, Adams. Burial will follow in Bellevue Cemetery, Adams. Calling hours are Tuesday from 5 to 7 PM at the funeral home. Memorial donations may be made to Hoosac Valley Regional School District Athletics (HVRSD Athletics) 191 Church St. Cheshire, MA 01225. To leave a message of condolence, please go online to www.paciorekfuneral.com

The family of Mr. Robert C. Armata created this Life Tributes page to make it easy to share your memories.

Send flowers to the Armata family.