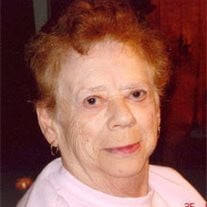 Mrs. Rita (Daigneault) McLear, 78, of 49 Meadow St. Adams, died Tuesday evening, January 24, 2006 at North Adams Regional Hospital. She was born in North Adams on November 4, 1927, a daughter of the late Josephat and Katherine (Scott) Daigneault, and attended Adams schools. Mrs. McLear worked at Sprague Electric Co. in North Adams for over 40 years, until retiring in 1989. She was a communicant of the Parish of Notre Dame & St. Thomas Aquinas, Adams. She enjoyed crocheting, reading and shopping. Her husband, James W. McLear, whom she married on June 19, 1948, died on November 20, 1985. She is survived by 2 daughters - Jo-Ann Irace and her husband, Louis, of Stamford, Vermont; and Susan Senecal of North Adams; 2 Brothers - Joseph Daigneault and Norman Daigneault, both of Adams; 1 Sister - Doris Lussier of Clarksburg, MA; 4 Grandchildren- Wendy Zieba and her husband, Rob, of North Adams; James Irace of North Adams; Scott Senecal of North Adams; and Shawn Senecal of Cheshire; and several nieces, nephews, grandnieces and grandnephews. Her daughter, Kathleen Carpinello, died on September 21, 2003. She was predeceased by 2 brothers, Lawrence and Raymond Daigneault. The funeral will be held on Saturday, January 28, at 9:00 AM from the AUGE-PACIOREK-SIMMONS Funeral Home, 13 Hoosac St. Adams, followed by a Liturgy of Christian Burial at 10:00 AM in St. Thomas Aquinas Church, Adams, celebrated by Rev. Daniel J. Boyle, Pastor of the Catholic Parishes of Adams. Burial will follow in Bellevue Cemetery, Adams. Calling hours are Friday from 5 to 7 PM at the funeral home. Memorial donations may be made to Elder Services of Berkshire County Meals on Wheels Program through the funeral home.

The family of Rita Mclear created this Life Tributes page to make it easy to share your memories.

Send flowers to the Mclear family.