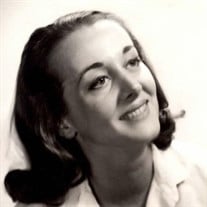 With her daughter holding her hand and her son on Facetime from San Francisco, Rita Catherine Jones died on Tuesday, May 25, 2021, at the Williamstown Commons, after a long battle with vascular dementia. She was 88 years old. She was born on December, 17, 1932 in New Bedford, Mass. Born two months early, she lived at the hospital in an incubator for the first weeks of her life. She was the daughter of Wilfred and Ellen Rainford Lescarbeau. Her brothers Wilfred, Frank, Leo, and sister Shirley predeceased her. Rita went to work at 14 years old at the local Woolworth's store in New Bedford. She graduated from New Bedford High School in 1950. She then moved to Boston to live with her older sister, Shirley, a nurse. They moved to New York City in 1952. Rita began to learn dance at age six, and continued to study in New York City. She studied under some of the finest teachers in the nation including M. Pianowski of the Pavlova Ballet Company and longtime choreographer, Leonard Fowler. She worked for 12 years as an administrative assistant to a medical adviser at Blue Cross and Blue Shield of Greater New York where she met her spouse, William H. Jones. They married in September 1968 and separated in 1976. She moved to The Berkshires from Long Island in 1982, with her sister, son and daughter. In 1983, she was the first job hunter to be placed in Berkshire County’s Women’s Services Center Program. She worked as a receptionist with the Northern Berkshire Mental Health Association. She was an office manager for Dr. Jean Armstrong, a chiropractor. She also worked as a teleservice coordinator at A-OK Business Services, and an assistant copy editor for The Williamstown Advocate. Her last job was as a sales clerk at the Novtex Factory Store in North Adams. She retired in 1994. She was a talented seamstress and loved to sew. As a young woman she sewed all of her own clothes, and later those of her children. She loved arts and crafts and would make toys and dolls for her children. Rita also loved to cook, regularly making homemade bread and other dishes from scratch for her family. An avid reader, Rita read books and was a constant patron of the Williamstown Public Library. She would often take out books, only to learn in a few pages that she had read the book already. She also volunteered in the Williamstown Elementary School reading to ESL students. She is predeceased by her son, David Michael Jones who died in 1971. She leaves her daughter, Gillian Jones of North Adams, and her partner Daniel Heck, and son Jonathan Jones of San Francisco, CA., and his partner Sarah Becker; as well as many nieces and nephews. Her sister, Shirley Lescarbeau, with whom she lived for many years, died in 1997. For the last three years of her life, she made her home with her daughter in North Adams and Williamstown. The family would like to thank all her caregivers, Center for Transitional Living, BFair, AdLib, Berkshire Medical Center, Hospice Care of The Berkshires, North Adams and Williamstown Commons. A Liturgy of Christian Burial will be celebrated on Wednesday, June 2nd, at 10:00 AM in St. Patrick-St. Raphael Church, Southworth St. Williamstown. Burial will follow in Eastlawn Cemetery. Calling hours at the PACIOREK FUNERAL HOME, 13 Hoosac St. Adams, are Tuesday from 5 to 7 PM. For those who have reached out and asked how you can help us during this time, your kindness is much appreciated as we navigate this heartbreaking moment. We kindly ask, if you are able to, to donate funds toward the funeral service as we hope to carry out all of Rita’s final wishes. Donations can be sent to Paciorek Funeral Home, 13 Hoosac St. Adams, MA 01220. To leave a message of condolence, please go online to www.paciorekfuneral.com

With her daughter holding her hand and her son on Facetime from San Francisco, Rita Catherine Jones died on Tuesday, May 25, 2021, at the Williamstown Commons, after a long battle with vascular dementia. She was 88 years old. She was born on... View Obituary & Service Information

The family of Rita C. Jones created this Life Tributes page to make it easy to share your memories.

With her daughter holding her hand and her son on Facetime from...

Send flowers to the Jones family.