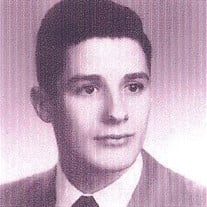 Mr. Richard H. Trudeau, 82, of Adams, died on Saturday, June 15, 2019 at Williamstown Commons. He was born in Westfield on August 27, 1936, son of the late Edward and Florence (Vidal) Trudeau. He attended schools in North Adams and graduated from Drury High School with the class of 1955. Mr. Trudeau worked as an inspector in the fabrication department of Beloit in Dalton until retiring. Mr. Trudeau was a Veteran of the Korean Conflict having served with the United States Navy until receiving his Honorable Discharge in 1957. He was a communicant of the Parish of St. John Paul II at Notre Dame des Sept Douleurs Church, Adams. He was a member of the Northern Berkshire Retirement Club and was on their golf and bowling leagues. He was an avid hunter and enjoyed working in his vegetable garden. He is survived by his wife the former Shirley A. Bard, whom he married on November 15, 1958; his son, Gary Trudeau and his wife Elizabeth of Cheshire; his daughter Jacqueline Pedercini of Fitchburg; four grandchildren, Jennifer Kuczynski, Sarah and Michael Pedercini and Rachel Green; three great grandchildren, Oliver, Alana and Hunter; his brother-in-law William Bakey of Port Ewen, NY and by many nieces and nephews. He is also survived by his extended family, Aaron, Trista and Landon Nowak of Cheshire. He was predeceased by a great grandson, Mason, and by his two sisters, Jeanne Bakey and Annette Philie and her husband, Dr. Henry Philie. A Liturgy of Christian Burial will be celebrated on Friday, June 28th at 10:00 A.M. in Notre Dame des Sept Douleurs Church, McKinley Square, Adams, celebrated by Rev. Steven Montesanti, Pastor. Burial will follow in Bellevue Cemetery, Adams. There are no calling hours. Memorial donations may be made to St. Jude Children’s Research Hospital, 501 St. Jude Place, Memphis, TN 38105 or to Shriner’s Hospital for Children, 516 Carew St., Springfield, MA 01104.

Mr. Richard H. Trudeau, 82, of Adams, died on Saturday, June 15, 2019 at Williamstown Commons. He was born in Westfield on August 27, 1936, son of the late Edward and Florence (Vidal) Trudeau. He attended schools in North Adams and graduated... View Obituary & Service Information

The family of Mr. Richard H. Trudeau created this Life Tributes page to make it easy to share your memories.

Send flowers to the Trudeau family.