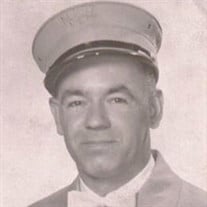 Richard P. “Dick” Ouellette, 93, a lifelong resident of Adams, passed away peacefully on July 18th, 2021. Richard was born on May 12, 1928, to the late Lucien and Pauline (Jordan) Ouellette. He was the loving husband of 70 years to Joan (Lahey) Ouellette. Richard leaves his daughter Laura Jeanne and her husband Michael E. Videtta, formerly of Canton MA; his sisters Claire M. Tremblay of Adams and Shirley A. Kosche of West Barnstable MA. He was lovingly known as “Poppy” to his three grandchildren, Jennifer Elizabeth and her husband Nathan Fraser Cannon of Salem NH, Tracy Ann Videtta NP formerly of Canton, MA, Michael Richard Videtta of Allston, MA and his great grandson Henry Fraser Cannon III. He also leaves many beloved nieces and nephews. Richard graduated from Adams High School in 1946. Two days after graduation he enlisted in the Navy and was stationed on the submarine USS Sea Poacher as a Torpedoman 3rd Class. Shortly after his return he married the love of his life, Joan, in 1951. Richard and his brother Donald took over their family business, Ouellette Brothers Plumbing, founded in 1923 by Lucien and Joseph Ouellette. He was available morning, noon, and night to help his customers. No job was too big or too small. He semi-retired in 1993, yet continued working well into the 2000’s. In addition to his family. Richard's proudest achievement was his service as a volunteer firefighter for the Alert Hose Company No. 1. For over 60 years his dedication to the Alerts was timelessly valuable. He served as a trustee of the Alert Hose Company from January 3, 1961 to August 4, 2020. He was the longest serving member in the history of the Alerts, as well as one of the longest serving volunteer firefighters in the state. Richard was a well-known and respected businessman in Adams as well as a longtime member of the Adams Lodge of Elks and will be sorely missed by his family, friends, and community. Richard was predeceased by his siblings Donald L. Ouellette, Roma I. (Ouellette) Brooks, Robert B. Ouellette, Paula M. Ouellette, Joan F. Ouellette and Gerald A. Ouellette. The funeral will be held on Monday, July 26th, at 8:45 AM from the PACIOREK FUNERAL HOME, 13 Hoosac St. Adams, followed by a Liturgy of Christian Burial at 10:00 AM in Notre Dame des Sept Douleurs Church, Adams. Reflections will be offered at 9:50 AM in the church, prior to the mass. Burial will follow in Bellevue Cemetery, Adams. Calling hours are Sunday from 2 to 5 PM at the funeral home. Those who have not yet been vaccinated for the COVID-19 virus are respectfully asked to wear a face covering for all services. Memorial donations may be made to the Alert Hose Company, 3 Columbia St. Adams, MA 01220.

The family of Mr. Richard P. Ouellette created this Life Tributes page to make it easy to share your memories.

Send flowers to the Ouellette family.