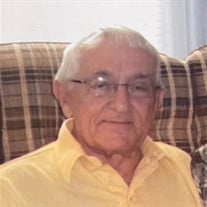 Mr. Richard Leonard Beauchemin, 86, of Adams, died on Tuesday, July 20, 2021, at Berkshire Medical Center in Pittsfield. He was born in Adams on September 30, 1934, a son of the late Albert and Albertine (Brodeur) Beauchemin. He attended Adams schools. Mr. Beauchemin worked as an electrician for many companies throughout Berkshire County, retiring from Sommer Electric, Adams. He was a communicant of the Parish of St. John Paul II at Notre Dame des Sept Douleurs Church, Adams. Mr. Beauchemin was a member of the Alert Hose Company in Adams, having been elected to the company on April 7, 1959 until he resigned on May 2, 1978, becoming an Honorary Member, to serve as an Engineer of the Adams Fire Department. He was also a member of the Adams Lodge of Elks, a former member of the Adams Pee-Wee Football Booster Club and the former Notre Dame Church Council. His wife, the former Joyce M. Gardner, whom he married on October 8, 1955, died on July 1, 2021. He is survived by two sons, Richard L. Beauchemin, Jr., and his wife Christine of New York and Mark Beauchemin and his wife Shari of North Adams; one daughter, Michelle Jennings of Springfield; eight grandchildren, three great grandchildren and many nieces and nephews. He was predeceased by two brothers, Albert and Bernard Beauchemin and by his sister Jeannette Ford. The funeral will be held on Wednesday, July 28th at 10:00 A.M. in the PACIOREK FUNERAL HOME, 13 Hoosac St., Adams. Burial will follow in Bellevue Cemetery. There are no calling hours. Memorial donations may be made to the Alert Hose Company, 3 Columbia St., Adams, MA 01220.

Mr. Richard Leonard Beauchemin, 86, of Adams, died on Tuesday, July 20, 2021, at Berkshire Medical Center in Pittsfield. He was born in Adams on September 30, 1934, a son of the late Albert and Albertine (Brodeur) Beauchemin. He attended Adams... View Obituary & Service Information

The family of Mr. Richard L. Beauchemin created this Life Tributes page to make it easy to share your memories.

Send flowers to the Beauchemin family.