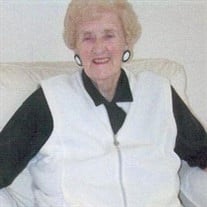 Rena Carlow Mahar, a lifelong resident of Adams, passed away on July 16, 2021 at Williamstown Commons. She was born in Adams on May 25, 1924, to Thomas and Katherine Bettendorf Carlow. She attended Adams schools and the former Bliss Business School. After working in the Berkshire Mills as a young girl, Rena volunteered to serve as a WAVE in the United States Navy during World War II and was stationed in Arlington, Virginia. After the war, Rena worked for the Commonwealth of Massachusetts as an inspector for the Department of Labor and Industries for 29 years, retiring in 1986. She married the boy next door, Henry Mahar, on May 10, 1947, and the two spent 63 years together before his death in 2010. They shared many wonderful trips together, including four to the Hawaiian Islands, and hundreds more to the “Chicken Stop” in Cheshire. One of her favorite trips happened in 1999, when her grandsons Blair Mahar and Scott Mahar researched and arranged to take her to Talihina, Oklahoma, to visit the site where her brother, Lt. Thomas Carlow, died in a B-29 bomber crash 50 years earlier. With the help of local citizens, they not only found the actual site of the crash but were able to recover and bring back several pieces of the aircraft that were still on the ground. She was able to leave flowers and pictures of her brothers’ family, pray and say goodbye. For a woman of immense religious faith and devotion to family, this was an important step to closure for Rena. Rena was a member of St. John Paul II Parish and its rosary sodality, the Catholic Daughters of America, American Legion Post 160, and Retired Employees of Massachusetts. Rena leaves her devoted and beloved son and daughter-in-law, Ronald and Donna Mahar, who cared for her in her final months with so much love and devotion. She also leaves two grandsons, Blair Mahar and his wife Greta of Savoy, and Scott Mahar and his partner Madeline Wendt of Northampton; Step grandson Jeff Baran and his wife Tracy of Rhode Island; Four great grandchildren who brought her so much happiness, Maya and Tess Mahar of Northampton, and Vienna and Chaz of Savoy; two step great grandchildren, Jonathan and Christopher Baran a Rhode Island; one brother, Bruce Carlow and his wife Carole, and one sister-in-law, Ann Carlow. She also leaves many nieces and nephews, all of whom were very dear to her. She was predeceased by three brothers, William Carlow, James Carlow and Lt. Thomas Carlow, as well as a sister-in-law, Kathleen Crabtree Carlow. The funeral will be held on Tuesday, July 20th at 10:00 A.M. in the PACIOREK FUNERAL HOME, 13 Hoosac St., Adams. Burial will follow in Bellevue Cemetery, Adams. A calling hour will be Tuesday morning from 9:00 A.M. until the time of the service in the funeral home. In lieu of flowers, memorial donations may be made to Hospice Care in the Berkshires, 877 South St., Pittsfield, MA 01201.

Rena Carlow Mahar, a lifelong resident of Adams, passed away on July 16, 2021 at Williamstown Commons. She was born in Adams on May 25, 1924, to Thomas and Katherine Bettendorf Carlow. She attended Adams schools and the former Bliss Business... View Obituary & Service Information

The family of Mrs. Rena Carlow Mahar created this Life Tributes page to make it easy to share your memories.

Rena Carlow Mahar, a lifelong resident of Adams, passed away...

Send flowers to the Mahar family.