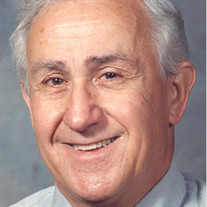 Mr. Ralph J. Frieri, 93, of Adams, died on Tuesday, November 19, 2019 at Berkshire Medical Center in Pittsfield. He was born in Pittsfield on December 13, 1925, son of the late Giuseppe and Rosina (Occhione) Frieri. He attended schools in Pittsfield. Mr. Frieri was a Veteran of World War II, having served with the United States Navy until receiving his Honorable Discharge on July 16, 1946. Mr. Frieri worked for many years in the Naval Ordnance Division of General Electric Co., Pittsfield, until he retired as a senior designer. Following his retirement he worked part time in the sporting goods department of the former Sears in Lanesboro. He was a member of the Adams Turn Hall and the Northern Berkshire Retired Men’s Club. He had served as an Adams Town Meeting member for many years and also served on the Adams Sewer Commission. He was a longtime hunter, fisherman, candle pin bowler and golfer. He enjoyed the New England, Patriots, NASCAR racing, the New York Yankees, Sunday dinner with family and photography. His wife, the former Dorothy Kolodziej, whom he married on November 25, 1950, died on October 7, 2004. He is survived by his two sons; Dennis Frieri and his wife Darlene and Steven Frieri and his wife Gay, all of Adams; one granddaughter, Krystle Frieri of Adams; three grandsons, Tristan and Travis Frieri of Adams and Shannon Frieri of White Hall, Arkansas; four great grandchildren, Ian, Aria, Riley and Trenton and many nieces and nephews. He was predeceased by his four sisters, Mary Jaworski, Julia Mercaldo, Helen Stroup and Antoinette Meyerhoff. The funeral will be held on Saturday, November 23rd at 10:30 A.M. in the PACIOREK FUNERAL HOME, 13 Hoosac St., Adams. Burial will follow in St. Stanislaus Cemetery, Adams. Calling hours are Saturday morning from 9:30 A.M. until the time of the service at the funeral home. Memorial donations may be made to St. Jude Children’s Research Hospital, 501 St. Jude Place, Memphis, TN 38105 or to Shriner’s Hospital for Children, 516 Carew St., Springfield, MA 01104

Mr. Ralph J. Frieri, 93, of Adams, died on Tuesday, November 19, 2019 at Berkshire Medical Center in Pittsfield. He was born in Pittsfield on December 13, 1925, son of the late Giuseppe and Rosina (Occhione) Frieri. He attended schools in Pittsfield. Mr.... View Obituary & Service Information

The family of Mr. Ralph J. Frieri created this Life Tributes page to make it easy to share your memories.

Send flowers to the Frieri family.