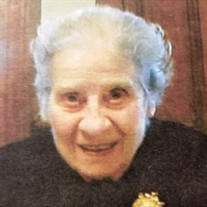 Mrs. Rachel L. (LaVersa) Vicari, 91, of Adams, died on Saturday, April 20, 2019 at Berkshire Medical Center in Pittsfield. She was born in North Adams on November 15, 1927, a daughter of the late Frank and Rachela (Iacopino) LaVersa. Her parents died when she was an infant and she was raised in foster care in Framingham, having moved back to North Adams later in life. Mrs. Vicari was primarily a homemaker but had worked for the former Sprague Electric Co., North Adams. She was a communicant of the Parish of St. John Paul II, Adams and had been a longtime communicant of the former St. Thomas Aquinas Church, Adams. She was a member of the YMCA in North Adams where her friends nicknamed her “Rocky”, and had been a Cub Scout Den Mother for many years. She enjoyed the outdoors, hunting, fishing skiing and camping. Her husband, Alfred R. Vicari, whom she married on July 28, 1951, died on March 8, 1998. She is survived by her two sons, Robert Vicari of Bennington and Peter Vicari of Adams, as well as many nieces and nephews. She was predeceased by two brothers, Joseph and Michael LaVersa and by a sister Sarah Zanett. The funeral will be held on Saturday, April 27th at 9:00 A.M. from the PACIOREK FUNERAL HOME, 13 Hoosac St., Adams, followed by a Liturgy of Christian Burial at 10:00 A.M. in Notre Dame des Sept Douleurs Church, McKinley Square, Adams, celebrated by Rev. Steven Montesanti, Pastor. Burial will follow in Southview Cemetery, North Adams. Calling hours are Friday from 4:00 P.M. to 7:00 P.M. at the funeral home. Memorial donations may be made to the Adams Outdoorsman for Youth, P.O. Box 122, Adams, MA 01220.

Mrs. Rachel L. (LaVersa) Vicari, 91, of Adams, died on Saturday, April 20, 2019 at Berkshire Medical Center in Pittsfield. She was born in North Adams on November 15, 1927, a daughter of the late Frank and Rachela (Iacopino) LaVersa. Her parents... View Obituary & Service Information

The family of Mrs. Rachel L. Vicari created this Life Tributes page to make it easy to share your memories.

Send flowers to the Vicari family.