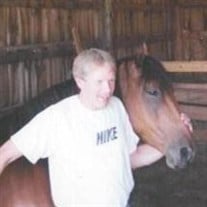 It is with great sadness that we announce the passing of Peter “PJ” Joseph Langenbach, 57, who died on April 19, 2022. Peter was born on August 13, 1964, and lived most of his life in Adams, Massachusetts. He was a graduate of Hoosac Valley High School with the class of 1984. He briefly served in the military and was a volunteer firefighter at the Stamford Fire Department. He enjoyed working with his father on Mt. Greylock, was employed by Krutiak Wood Products, Clarksburg Construction and for his brother Paul at Timeless Lighting. He will always be remembered for his incredible kindness, generosity, friendliness, humor and was the life of the party. He found great joy being outdoors, drawing, sketching, snowmobiling, loved going to concerts and followed across the country his favorite band the Grateful Dead. His true kindness showed through his love for animals. His pride and joy were his two horses Red and Blackie, which were adopted wild Mustangs, and his dog Bandit. He is survived by his mother Lois Leab (Michael Gaspardi); brothers, Paul, Kristian, Dennis, and half-sister Christina’ Nephews, Michael, Robert, Timothy, Jason, Kevin and Zion; grandnieces, grandnephews, Aunts, Uncles and cousins. He was predeceased by his father Karl Langenback, his grandparents, his brother Dale and his half brother Karl Jay. Condolences are Saturday, April 30th at the PACIOREK FUNERAL HOME, 13 Hoosac St. Adams, from 4 to 6 PM, with a service at 6:00 PM. A reception will follow at the Adams Elks Lodge.

The family of Mr. Peter "PJ" Langenback created this Life Tributes page to make it easy to share your memories.

It is with great sadness that we announce the passing of Peter...

Send flowers to the Langenback family.