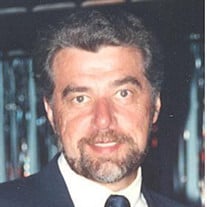 Mr. Peter J. Alibozek, 73, of Adams, died Wednesday morning, March 11, 2020 at his home, surrounded by his family. He was born in Adams on May 29, 1946, the son of James and Monica (Stawarz) Alibozek. He attended Adams schools, graduating from the former Adams High School with the Class of 1964. He served with the US Army Reserve for several years until his Honorable Discharge in 1973. Pete worked in the Power Transformer division of General Electric Co. in Pittsfield, and later transitioned to General Dynamics Corp, retiring from their shipping and receiving department. He had been a communicant of St. Stanislaus Kostka Church, and was a former member of the Adams Hound and Hunt Club. He enjoyed Hunting, fishing and farming at his family farm. His wife, the former Kathryne M. Lloyd, whom he married on May 17, 1969, died on March 23, 2000. He is survived by two daughters, Tammi Alibozek of Adams, and Sarah Barroso of Chicopee; two sons, Michael Alibozek and his wife, Tina, of Adams, and Lucas Alibozek of Cheshire; five grandchildren, Micaela Scapin, Victoria Alibozek, Nicholas Alibozek, Syler Barroso and Chase Barroso; three sisters, Joan Marko and her husband Edward of Adams; Virginia Piekos of Adams and Florence Hoellerich and her husband, Roy, of Cheshire; his longtime companion, Margaret McDonald; as well as several nieces, nephews, grandnieces and grandnephews. Pete’s family would like to thank his care giver, Patty Dellaghelfa, as well as the staff of HospiceCare in the Berkshires, for the care and kindness they gave to Pete and his family. The funeral will be held on Monday, March 16th, at 9:00 AM from the PACIOREK FUNERAL HOME, 13 Hoosac St. Adams, followed by a Liturgy of Christian Burial at 10:00 AM in St. Stanislaus Kostka Church, Adams, celebrated by Rev. Steven Montesanti, Pastor. Burial will follow in Bellevue Cemetery, Adams. Calling hours are Sunday afternoon from 2 to 5 PM at the funeral home. Memorial donations may be made to HospiceCare in the Berkshires, 877 South St. Pittsfield, MA 01201. To leave a message of condolence, or for directions, please go online to www.paciorekfuneral.com

Mr. Peter J. Alibozek, 73, of Adams, died Wednesday morning, March 11, 2020 at his home, surrounded by his family. He was born in Adams on May 29, 1946, the son of James and Monica (Stawarz) Alibozek. He attended Adams schools, graduating from... View Obituary & Service Information

The family of Mr. Peter J. Alibozek created this Life Tributes page to make it easy to share your memories.