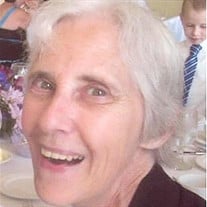 Mrs. Paula Lee (Brassard) Armata, 69, of Cheshire, died on Monday, July 29, 2019 at her home surrounded by her family. She was born in Rutland, VT on September 24, 1949, a daughter of the late Joseph and Mary (Devoid) Brassard. She attended schools in North Adams and graduated from the former St. Joseph’s High School, North Adams in 1967. She then went on to receive her associate’s degree in business from the St. Joseph Business College, the former Southern Vermont College in 1969. Mrs. Armata first began working at Dairy Queen in high school, where she met her late husband Michael, whom she would have been married for 49 years this past July. She then worked as a payroll clerk at North Adams Hospital. She last worked for the former Big Y Supermarket in Adams and earlier for the former Adams Supermarket in Pittsfield and Adams. She retired in 2011 after 25 years of service. She enjoyed spending time with her family and friends, singing, dancing and listening to music, participating in all the school musicals in high school. She was a communicant of St. Mary of the Assumption Church, Cheshire. Her husband, Michael E. Armata whom she married on July 25, 1970, died on January 18, 2018. She is survived by her two daughters, Melissa Armata of Templeton and Julie Reynolds and her husband Timothy of Pittsfield; her son, Michael Armata and his wife Amy of Quincy; two grandsons, Devin and Cameron Reynolds; three sisters, Dale Cookis and her husband Julius, Joanna Therrien and her husband Donald and Lisa Brassard, all of North Adams. She is also survived by many nieces and nephews. The funeral will be held on Saturday, August 3rd at 8:45 A.M. from the PACIOREK FUNERAL HOME, 13 Hoosac St., Adams, followed by a Liturgy of Christian Burial at 10:00 A.M. in St. Mary of the Assumption Church, Cheshire. Burial will follow in St. Stanislaus Cemetery, Adams. Calling hours are Friday from 4:00 P.M. to 7:00 P.M. at the funeral home. Memorial donations may be made to Hospice Care in the Berkshires, 877 South St., Pittsfield, MA 01201.

Mrs. Paula Lee (Brassard) Armata, 69, of Cheshire, died on Monday, July 29, 2019 at her home surrounded by her family. She was born in Rutland, VT on September 24, 1949, a daughter of the late Joseph and Mary (Devoid) Brassard. She attended... View Obituary & Service Information

The family of Mrs. Paula L. Armata created this Life Tributes page to make it easy to share your memories.

Send flowers to the Armata family.