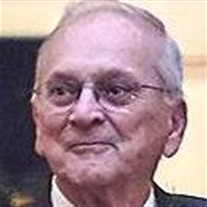 Mr. Paul Joseph Aitken, 88, of Adams, died on Thursday, December 13, 2018 at the home of his son David in Adams. He was born in Pittsfield on February 25, 1930, a son of the late Thomas and Mary (Galok) Aitken. He attended schools in Pittsfield and graduated from Pittsfield High School. He then went on to earn his Bachelor’s Degree in Mathematics from the former North Adams State College in 1972. Mr. Aitken worked for the former A.H. Rice Co., Pittsfield for many years until retiring. He was a communicant of the Parish of St. John Paul II at St. Stanislaus Kostka Church, Adams. He was a member of the Forest park Country Club, the Adams Post 160 American Legion and the former St. Stanislaus Kostka Society. His wife, the former Eugenia Lic, whom he married on June 27, 1953, died on March 22, 2015. He is survived by two sons; David Aitken and his wife Susan and James Aitken and his wife Carol, all of Adams; his daughter, Donna MacDonald and her husband Edward of Adams; seven grandchildren, Chrissy Robillard, Thomas MacDonald, Corey and Ethan Aitken, Kyle Rowe, Casie Soldo and Kirby Rowe; seven great grandchildren, Cameron and Emily Robillard, Caroline MacDonald, Aurora Aitken, Lennon Rowe and Scarlett and Sawyer Soldo; and many nieces and nephews. He was predeceased by his brother William Aitken and by his Sister-in-Law, Jennie Aitken. The funeral will be held on Saturday, December 22nd at 9:00 A.M. from the PACIOREK FUNERAL HOME, 13 Hoosac St., Adams, followed by a Liturgy of Christian Burial at 10:00 A.M. in St. Stanislaus Kostka Church, Adams, celebrated by Rev. Steven Montesanti, Pastor. Burial will follow in St. Stanislaus Cemetery, Adams. Calling hours are Friday from 4:00 P.M. to 7:00 P.M. at the funeral home. Memorial donations may be made to Hospice Care in the Berkshires, 877 South St., Pittsfield, MA 01201 or to St. Stanislaus Kostka School, 108 Summer St., Adams, MA 01220.

Mr. Paul Joseph Aitken, 88, of Adams, died on Thursday, December 13, 2018 at the home of his son David in Adams. He was born in Pittsfield on February 25, 1930, a son of the late Thomas and Mary (Galok) Aitken. He attended schools in Pittsfield... View Obituary & Service Information

The family of Mr. Paul J. Aitken created this Life Tributes page to make it easy to share your memories.

Send flowers to the Aitken family.