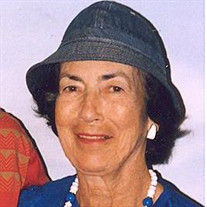 Mrs. Patricia C. (Roy) Trzcinski, 98, of Cheshire, died on Saturday, August 25, 2018 at North Adams Commons. She was born in Lawrence, MA on March 18, 1920, daughter of the late George and Catherine (Dooley) Roy. She attended schools in Adams. Mrs. Trzcinski worked for many years for the former Sprague Electric Co., North Adams until her retirement. She was a communicant of St. Mary of the Assumption Church, Cheshire. Her husband, Edward F. Trzcinski, whom she married on October 9, 1948, died on May 26, 2015. She is survived by her brother, Donald Roy of Liverpool, NY and many nieces, nephews, great nieces and great nephews. She was predeceased by a brother George Roy and by three sisters, Sofie Bentley, Dorothy Kearcher and Jeannette Corbosiero. A Liturgy of Christian Burial will be celebrated on Thursday, August 30, at 12:00 NOON in St. Mary of the Assumption Church, Cheshire, celebrated by Rev. Matthew Guidi, Pastor. Burial will follow in Bellevue Cemetery, Adams. There are no calling hours. Memorial donations may be made to a charity of the Donor’s Choice through the PACIOREK FUNERAL HOME, 13 Hoosac St., Adams, which is in charge of arrangements.

The family of Mrs. Patricia C. Trzcinski created this Life Tributes page to make it easy to share your memories.

Send flowers to the Trzcinski family.