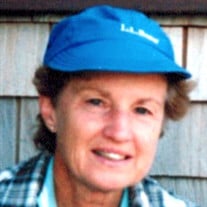 Mrs. Patricia Ann Gilley Linscott 91, of Adams since 1951, loving mother and grandmother, passed away on Monday, January 27, 2020. Pat was born in Bar Harbor, Maine on May 27, 1928 to Margaret MacQuinn Gilley and Arthur Stanley Gilley. She attended Berwick Academy and Westbrook College in Portland. Focusing her career in the sciences, she went to work as a Medical Technician for her uncle Dr. Pliny Allen in Nebraska. When Dr. Allen moved his family from Omaha to North Adams, Pat joined him back East to set up the lab at the North Adams Hospital. As fate would have it, while attending a Dale Carnegie class, “How to Win Friends and Influence People,” she met her future husband Bill Linscott. They were married on November 24, 1951 and had two children. She loved being outdoors cross country skiing, hiking, and snowshoeing around the foot of Mt. Greylock, these were some of her greatest pastimes. Active well into her 80s, she shared these hobbies with her children and also did competitive running races. Pat loved her home state of Maine, the ocean and took many summer camping vacations in Acadia with her family. She was a passionate supporter of her grandchildren’s endeavors, Jillian’s music career attending her concerts until she was 90. Pat enthusiastically followed Collin and his skiing adventures and Photography career. As a member of the community, Pat volunteered as a driver for the American Cancer Society and sang in the choirs at St. Mark’s and All Saints Episcopal Churches. She was known for her spirited personality, salty sense of humor and a strong commitment to her family. She is survived by her two daughters, Heather Linscott and Robin Avery, both of Adams; Lynn Avery, two grandchildren, Collin Avery and his wife Megan, Jillian Avery and her partner Nick, and by many cousins, including Susan Potter and David Allen, whom she cared for in their youth. Her death was preceded by her parents as well as her husband Bill Linscott on February 14, 2001. The funeral will be celebrated on Monday, February 3rd at 11:00 A.M. in All Saints Episcopal Church, Summer St., North Adams. Burial will be at a later date in the spring. Calling hours are Sunday from 3:00 P.M. to 5:00 P.M. at the PACIOREK FUNERAL HOME, 13 Hoosac St., Adams. The family requests memorial donations be made in lieu of flowers to two organizations close to Pat's heart: Eagles Community Band, P.O. Box 1946, Pittsfield, MA 01202 or to Adams Ambulance Service 185 Columbia St., Adams, MA 01220.

Mrs. Patricia Ann Gilley Linscott 91, of Adams since 1951, loving mother and grandmother, passed away on Monday, January 27, 2020. Pat was born in Bar Harbor, Maine on May 27, 1928 to Margaret MacQuinn Gilley and Arthur Stanley Gilley. She... View Obituary & Service Information

The family of Mrs. Patricia A. Linscott created this Life Tributes page to make it easy to share your memories.

Send flowers to the Linscott family.