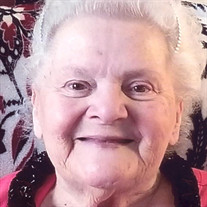 Ms. Patricia Ann (Lescarbeau) Berard, 85, of North Adams, died on Saturday, March 14, 2020 at Williamstown Commons. She was born in North Adams on February 8, 1935, a daughter of the late Philippe and Yvonne (Couture) Lescarbeau. She attended schools in North Adams. Ms. Berard last worked for Cord Master in North Adams for 25 years until her retirement. Earlier she had worked for the former General Cable in North Adams for 35 years. Patricia was a hard working independent woman, and also loved to have fun. A favorite pastime in her younger years was to go out and dance the jitterbug with friends. She loved a good steamy romance novel, and couldn't get enough of her television crushes, Shemar Moore on Criminal Minds and The Count from Count's Kustoms. An avid crocheter, she enjoyed making beautiful things for the people she loved. She was a music lover, especially country, but Engelbert Humperdinck was a long time favorite! Patricia had the biggest heart, the best laugh, and a stubborn streak like nobody's business! She was loved by all who were lucky enough to meet her and she always left an impression. In her later years, people watching from her front porch was a favorite activity, and you knew the weather was changing when she was out there after a long winter. Patricia's greatest joy in life was being with her family, and not only did she single handedly raise her own children, she was also instrumental in helping to raise her grandchildren and great-grandchildren. To be on the receiving end of her love and affection was magical, and she doled it out to everyone equally and often. Her legacy will continue through the cherished memories her family carries with them, and she will forever be missed. She is survived by her three children, Robert Berard and his significant other Tracy Poette, Linda Berard, and Debra Gardner and her husband Art, all of North Adams; four grandchildren, Rebecca Gamari and her husband Kurt, Kristy Williams and her husband Dave, Robert Berard, Jr. and his significant other Tammy Zdon, and Amy Porio and her significant other Denny Fletcher; three great grandchildren, Alana Dubie, Renae Gamari and Chloe Gamari; her brother Philip Lescarbeau and his wife Judy of North Adams and many nieces and nephews. She was predeceased by two brothers, William and Arthur Lescarbeau and by a sister Claire Presnal. Funeral services for relatives and friends will take place at a later date in the spring. Memorial donations may be made to the Alzheimer’s Association, 309 Waverley Oaks Rd, Waltham, MA 02452 or to the American Diabetes Association, 5 Pine West Plz Ste 505, Albany, NY 12205.

Ms. Patricia Ann (Lescarbeau) Berard, 85, of North Adams, died on Saturday, March 14, 2020 at Williamstown Commons. She was born in North Adams on February 8, 1935, a daughter of the late Philippe and Yvonne (Couture) Lescarbeau. She attended... View Obituary & Service Information

The family of Ms. Patricia A. Berard created this Life Tributes page to make it easy to share your memories.

Send flowers to the Berard family.